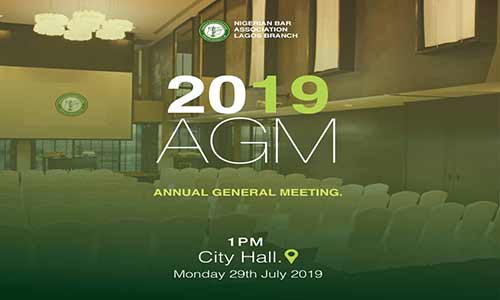 The NBA Lagos Branch will hold its Annual General Meeting on the 29th of July, 2019 at City Hall, Victoria Island, Lagos by 1 pm.

In a statement by the branch Secretary, Ikechukwu Uwanna stated that the AGM replaces the monthly branch meeting for July which would ordinarily have held on the second Monday of July.

“The AGM this year is iconic because the present Executive Committee will at the meeting handover to the newly elected executive committee to commence a new two-year tenure.

“The AGM will also be an opportunity for the Executive Committee to present various reports to the members of the branch including but not limited to financial and accounting report, the secretary’s report, audit report and many more.

“There is also going to be our traditional cocktail party after the AGM.

“Copies of the Audited Account will be distributed shortly,” he added.