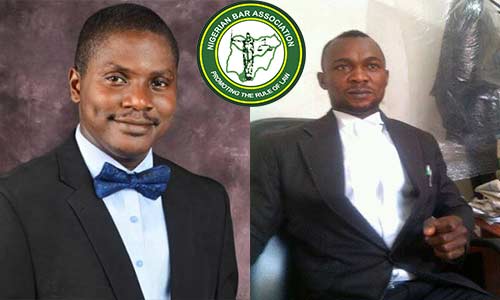 Nigerian  Bar Association Ikorodu branch Chairman,  Bayo Akinlade Esq has given account on how he intervened on the case of Benson Aigbijie who was wrongly accused by the police in a fraud syndicate.

TheNigerialawyer (TNL) recall that in a press release signed by the Secretary of the branch, Chidi Ezenwafor, it was revealed that

Benson Aigbojie and Maduabuchi both of NBA Abuja (Unity Bar) were accused of heading a fraud syndicate of about twenty persons to defraud a company to the tune of N52,000,000.00.

According to Ikorodu Chair, On the 3rd of August 2019, I read about a lawyer who apparently was assaulted by the police and linked to a fraud syndicate.

“Further reports coming from our lawyer’s social media handle revealed that the said lawyer was wrongly accused, however, he was en route to Lagos with men of the police force for further investigation.

“I spoke to Mr. Madubachi, who had broke the news of Mr. Benson’s arrest and also called the National Publicity Secretary of the NBA to offer our assistance as a Branch to intervene in the matter once the lawyer arrived in Lagos, he gave me the go-ahead and instructed me to report back to him.

“I then shared the report with our Branch’s Police Duty Solicitors and agreed that on Sunday the 4th of August we would go to Zone 2 to wait for or meet with the lawyer and ensure his release from police custody.

“We, however, had to cancel our trip on the morning of the 4th when we were informed that due to road repairs a heavy traffic had built up on the Ikorodu access roads making it difficult for people to go into the mainland and Island.

“The Chairman of the Unity Bar in Abuja, Mr. Folarin Aluko later called me in the afternoon to inform me that Mr. Benson was yet to even arrive in Lagos as they spent the night at Ondo State and according to the IPO they were still on the road to Lagos and would enter into Lagos very late on Sunday.

“I then decided that the best approach for me was to go to zone 2 very early on Monday morning by boat as the roads were still under pressure with traffic everywhere.

“I arrived at Zone 2 sometime after 7 am and called the IPO who was still on his way with Mr. Benson from where they spent the night.

“Finally, around past 8 am, I met with the IPO and Mr. Benson for the first time.

“Apparently, the IPO knew me because he served in Ikorodu. He said he was treated well by the lawyers in Ikorodu and received me very well. I then asked if I could take Mr. Benson’s bail and he said that I could and that Mr. Benson would be released immediately after his bosses arrived.

“So I called my YLF Chair to book a flight for Mr. Benson to travel back to Abuja later in the day.

“We arranged for an ID card to be produced for him so that he could board the flight and paid for his taxi fare to the airport.

“I then went to see the Officer in Charge of the unit who informed me that the AIG has asked to see the officers and Mr. Benson so I couldn’t leave with him just yet.

“I could not wait for that meeting but I wrote an application for his bail and signed the bail bond and proceeded to catch my flight to Abuja.

“Mr. Folarin Aluko called me later in the evening to inform me that Mr. Benson did not finish his meeting with the AIG on time and by the time he was heading out to the airport, traffic had built up and he became stuck in traffic.

“Mr. Benson had to remain in Lagos yesterday but he managed to reschedule is departure time for this morning.

“Throughout our intervention in this matter, Mr. Kunle Edun, Mr. Aluko and Mr. Madubachi were in touch with me providing me with the necessary information to act upon.

“I thank all my PDSS volunteers for being on standby.

“This is NBA working for the good of its members no matter the branch they belong to,” Bayo Akinlade said.

TNL also recalls that the Chairman of NBA Abuja, Folarin Aluko had said that Benson Aigbojie is no longer classified as a Person of Interest in the alleged fraud syndicate in which he was indicted.