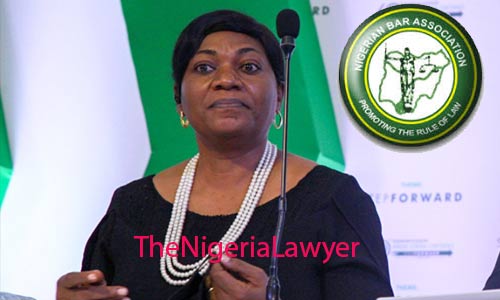 The General Secretary of the Nigerian Bar Association, Joyce Oduah has been suspended from office, TheNigeriaLawyer can reliably report.

According to a source privy to her suspension, the leadership of the Association convened an emergency meeting this morning where all National Officers including the General Secretary and the President who have both been at loggerheads over the weekend were present.

TheNigerialawyer recalls that over the weekend, the NBA was embroiled in an internal crisis.

On the 26th and 27th of June, the General Secretary, Mrs. Joyce Oduah and the Assistant General Secretary, respectively, issued a notice stating that hearing and voting for the amended 2021 Constitution of the NBA will be held at the 2022 Annual General Meeting of the Association, in Lagos.

However, in a dramatic twist, the General Secretary in a statement dated 12th of August and made available to the general public stated that there is no motion for the amendment of the 2015 Constitution as amended in 2021. She said confirmed her withdrawal of the notice she issued earlier on the ground of non-compliance with Section 15(1) of the NBA Constitution.

She also declared the notice issued by the Assistant General Secretary as unconstitutional, ultra vires, null and void.

In a swift response, the NBA President, Olumide Akpata in a statement made available to TheNigeriaLawyer on the 13th of August, urged all and sundry to discountenance the purported withdrawal of the notice of proposed constitutional amendments by the General Secretary, saying same was not authorised by all other National Officers.

He reaffirmed the validity of the earlier notices sent out by the Gen Sec and her Assistant on the 27th of July as subsisting.

As a follow up, the NBA leadership convened an emergency meeting of National officers yesterday, and after deliberations, the meeting was adjourned to this morning as they reconvened by 8am.

According to our source, the NBA President recused himself from the meeting while Oduah validated all the statements credited to her by the social media. She subsequently exited the virtual meeting held this morning by the NBA-Exco.

NBA-Exco reasoned that it would be inappropriate for Oduah to continue in her position, especially as preparations for the NBA AGM and NEC Meetings are in top gear, and Moreso as there are transition NEC and AGM Meetings.

An official statement is expected soon.