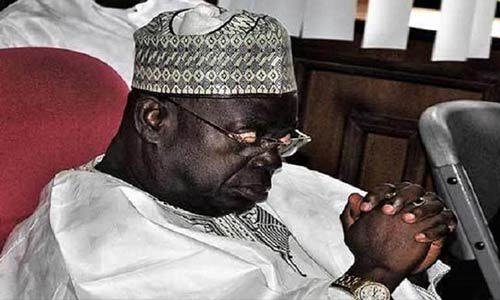 The defendants are being prosecuted for alleged criminal breach of trust and diversion of N2 billion ecological fund.

The 10th prosecuting witness, PW10, Hamisu Musa Jankaro, erstwhile Chief Accountant and later, Permanent Secretary, Government House, Minna, between 2010-2016, told the court that he was instructed by the then Chief of Staff to the Niger State Government, Umar Nasko, to disburse N10 million per withdrawal from January 2011 to December 2011, to the 2nd Defendant, Tanko Beji, the then Director General of the Niger State PDP Campaign Organisation, or his nominees who are in charge of Senatorial Districts A, B and C.

He identified exhibits K series, H series, and L series as accounts documents and statements of accounts for the accounts and further stated that he was a core signatory to the accounts.

The witness disclosed that the monies were transferred from Niger State Ministry of Finance accounts to the Niger State Government Security Vote accounts.

The Prosecuting Counsel, Abdullah Faruk, told the court that one of his witnesses could not make it to the court yesterday because of the security challenges and applied for an adjournment till December 2.

Earlier, the PW 9, Eriba Idiakwu, a relationship manager with Ecobank brought documents, statements of accounts and certificate of identification which were tendered and marked as exhibits in respect of a company, MJ Eco project limited.