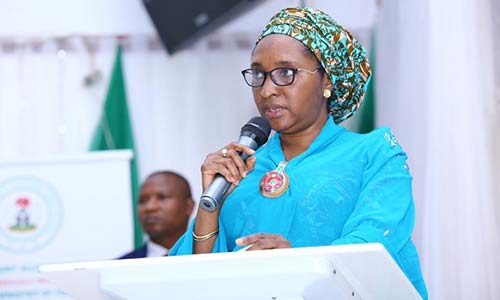 States are to share N649 billion – the final tranche of the Paris Club Refund.

But debtor-states will have to settle their debts soon, Finance Minister Mrs. Zainab Ahmed said yesterday, adding that the Federal Government plans to begin the final phase of the debt refund.

The minister told reporters at a news conference in Abuja yesterday that “the total sum of N649.434 billion was verified by the ministry as the outstanding balance to be refunded to the state governments.”

She also revealed that the payments made by the Central Bank of Nigeria (CNB) as at March stood at N691.560 billion.

“The increase in CBN payments partly arose from exchange rate differential at the point of payment,” Mrs Ahmed said.

The minister, who did not divulge how much would accrue to each of the 36 states, noted that “some states still have outstanding balances, which will be refunded, in due course.”

The minister also stated that N4.8 trillion was shared out to the three-tiers of government between September, last year and April from the Federation Account.

“The sum of N784.7 billion realised from Value Added Tax (VAT) for the same period was also shared.”

On Nigeria’s growing debt profile, Mrs Ahmed stated that the debt increase from N12.2 trillion to N23.0 trillion is by design.”

“The Federal Government,” she said, “designed the Economic Recovery and Growth Plan (ERGP) to reflate the economy to take us out of recession when we came on board and we made an assessment; it was clear that our country was going into recession. When we did a research on the best way to reverse the recession, it was to reflate the economy and that means putting resources in the economy so that consumption will increase.”

Based on the government’s findings, she said, the government “designed the ERGP to borrow in the first, second and third years and in the fourth year the borrowing was supposed to start reducing. That is exactly what we have done.”

“Some of them are still not out of recession, but because of the method we adopted; but the consequence, of course, is the increase in debt and that is why the Ministry of Finance and all its agencies are working to make sure that we increase revenues.”

She reiterated that ‘at 19.09 per cent Debt to Gross Domestic Product (GDP) ratio we still are the lowest compared to countries like Brazil, South Africa, that all have an average of 56 per cent debt to GDP ratio.

“If you look at our budget, the debt service to GDP ratio is 30%, but because revenues underperformed, it went as high as 50 per cent to 55 [per cent and in some months up to 60 per cent. So, if our revenues perform optimally we are in a good place as far as revenues are concerned.

“However, the government is addressing the issue of the high debt service burden by a combination of substitution strategies, which include refinancing our shorter term, higher cost debts to longer term, lower cost debt.

“The emphasis on increasing and diversifying non-oil revenues from taxes, import duties is already yielding results, the ministry, in close collaboration with the Debt Management Office (DMO), is working on moving from high cost short term borrowings to long term low cost borrowings.”

On revenue, Mrs Ahmed lamented that generating revenue was a problem for the government. To address this challenge, she said since revenue growth is a strategic priority for the Ministry of Finance, the Strategic Revenue Growth Initiative (SRGI), a key aspect of the government’s strategy to improve non-oil revenue through fiscal buffers, and ultimately improve our Revenue to Debt Service Ratio (RDSR) and to improve the ratio of non-oil revenue to non-oil GDP, was initiated.

One of the SRGI initiatives is the VAT expansion programme, which is ongoing and is designed to ensure that “we improve collection efficiency whilst ensuring there is automation of VAT collection at source in some key sectors”.

The minister noted that the Federal Inland Revenue Service (FIRS) had already begun the VAT automation programme for banks and other large industries. “The target is to improve the VAT collection, which was N148.92 billion as against the budgeted figure of N207.51 billion in 2018. Such digitalisation and transformation initiatives are an integral part of these revenue collection efforts,” she said.

Mrs Ahmed added: “Independent revenues are a critical part of the revenue mix of this country. We have not seen optimal performance yet of independent revenue, but I must say that there has been some improvement.

“The independent revenue that was generated in 2018 was N454.34 billion; this is against a budgeted figure of N847.95 billion, representing 54 per cent performance.”

“This represents a significant improvement that has helped to stabilise the economy, including stabilizing our exchange rates,” the minister said.

The Foreign Exchange (FX) market, she said, “remains relatively stable because from 2017 to now there is a significant convergence of the NIFEX and NAFEX windows and they have, in fact, merged by the end of November 2018.”

On funding the Nigeria Sovereign Investment Authority (NSIA) that manages the nation’s Sovereign Wealth Fund (SWF), the government hopes “to work with the National Economic Council chaired by the Vice President, with all the states as members, to be able to save on a regular routine basis into the NSIA.”

The minister explained: “Right now, what is provided is the small savings into the stabilisation fund. It takes a lot of time; there is N5.9 billion that has accrued that we will transfer to the NSIA, but we want the savings to be more aggressive

“There is a provision in the NSIA Act that requires that savings is made from the Excess Crude Account (ECA), but we have not been able to attain that but the Ministry of Finance is working to address that, but unfortunately it’s not something that the Federal Government alone can decide because the ECA is an account for the whole federation. So, we have to get the understanding and concurrence of the states to be able to start that routine savings to the NSIA.”

On the national minimum wage, Mrs. Ahmed said: “The financial implications have been worked out by the presidential committee that was set up and they have submitted their report to the President and the President has directed the report to us. We have looked at the report and what we are working on now is how we can finance the new minimum wage.

“Apart from the increase of the minimum wage from N18, 000 to N30,000, there is also consequential adjustment that we have to negotiate with the labour unions.

‘The total financial implications will be determined after negotiations. The negotiation will determine what every other staff that is above the minimum wage will get. It could be a flat amount or a progression.

“The other aspect that should be clear is that there is an increase for the NYSC as well because NYSC, by its Act, is designed that they earn the minimum wage. So, NYSC allowance also has to increase to N30, 000. So, I cannot give you projections right now because the negotiations are not yet concluded.”

On the 2019 Budget, Mrs Ahmed admitted that the document had been sent by the National Assembly to the President.

“It is currently being reviewed to enable the President decide about assenting to the bill. We expect this to happen as soon as possible. I believe the assessment will be concluded this week”, the minister said.