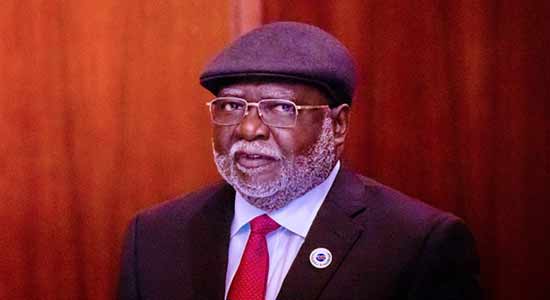 Since his assumption of office, the Chief Justice of Nigeria, Justice Olukayode Ariwoola, has continued to talk tough against the flagrant violations of the rule of law in the country. Alex Enumah writes that it’s high time the CJN matched his tough stance with actions

Justice Olukayode Ariwoola was on October 12, 2022 sworn in as substantive Chief Justice of Nigeria (CJN). His sudden elevation to the office was due to the voluntary retirement of then CJN, Justice Ibrahim Muhammad, who relinquished the office on health grounds.

He was first appointed in acting capacity on June 27, 2022, pending his confirmation by the Senate. But since his appointment as substantive CJN, Justice Ariwoola has however, not hidden his intention to redeem the battered image of the judiciary.

Since the beginning of the administration of President Muhammadu Buhari, when operatives of the Department of State Services (DSS) invaded the homes of some judicial officers, including a then serving Justice of the Supreme Court, the late Justice Sylvester Ngwuta in October 2016, the integrity of the judiciary has remained under scrutiny. Only last year, a group of persons purported to be from a special committee under the Federal Ministry of Justice also invaded the residence of the then serving Justice of the Supreme Court, Justice Mary Peter-Odili (rtd) in another botched operation.

Apart from the invasion of the homes of judicial officers, courts are also being desecrated especially by both security operatives and thugs across the country. A team of DSS personnel had also invaded a Federal High Court in Abuja in a bid to re-arrest the convener of #RevolutionNow, Mr. Omoyele Sowore, shortly after he was granted bail.

However, Ariwoola shortly after assuming office has been talking tough and sending out warnings to relevant quarters that his administration would not hesitate to wield the big stick both within the judiciary and outside especially against those who flagrantly violate the rule of law.

Speaking recently at a Conference of Attorneys General in Abuja, the CJN again warned politicians and others who are in the habit of disregarding the rule of law that it would no longer be business as usual under his watch.

Ariwoola warned that the silence of the judiciary must not be mistaken for weakness or vulnerability. While stating that the rule of law has been assailed from all fronts, especially by those who are supposed to uphold and guard it jealously, the CJN who was represented by a Justice of the Supreme Court, Justice Kudirat Kekere-Ekun, lamented that judicial officers and court facilities have been variously attacked, molested, harassed and desecrated across the country.

“I wish to let whoever cares to listen to know that nobody, no matter his or her position in society, should mistake our golden silence for weakness or vulnerability.

“The judiciary under my watch will not sit by the sidelines to watch the temple of justice and ministers of justice being flagrantly chastised and whipped into silence,” he explained.

In what seemed to be directed at the security agencies in the country, the CJN said: “No one in this country is permitted under any guise to take the law into his or her hands simply because he or she has the guns to wield”.

Some police officers had in two separate incidents in December last year shot dead two Nigerians, including a Lagos-based legal practitioner, Mrs. Bolanle Raheem, who was said to be pregnant with twins.

In an apparent reference to such incidents, Ariwoola advised that the earlier judicial officers and the courts are respected the better for all Nigerians.

To restore the sanctity of the courts and its officers, the CJN charged stakeholders in the justice sector to ensure fairness, equity and the rule of law prevail at all times.

He specifically called on the attorneys-general in the country to begin to live up to their callings by repositioning the judiciary in their respective states through the manner they conduct their affairs.

While he warned them that “oppression and suppression of perceived enemies must not have a bearing on your conduct,” he added that, “judicial officers must not suffer intimidation and chastisement and chief justices must not go cap -in-hand to beg for funds to run their courts”.

Ariwoola urged all participants in their various capacities to start making a comprehensive approach to the effective and seamless administration of criminal justice and the implementation of the rule of law.

The CJN had at a recent capacity-building workshop and formal inauguration of members of the 2023 Election Petition Tribunals, also warned that his administration “will not condone any act of recklessness, abuse of power and public trust”.

He advised judges to see their membership of the tribunals as a rare privilege for which they must give a good account of themselves.

“Your Lordships should count yourselves worthy to be so entrusted with this humongous responsibility of deciding the fate of those that would be contesting elections into various political offices in the country in 2023.

“Though judicial officers are not known to possess some supernatural powers to perform wonders, I can confidently assure you that the society in which you operate will certainly expect the impossible from you as members of Election Petitions Tribunals”, the CJN noted.

He explained that aside the expectations of the public, the judges should prepare themselves for all sorts of verbal assault and uncomplimentary remarks from some aggrieved politicians and their supporters but must remain steadfast and focused.

“Trust is a burden and you must discharge it with utmost sincerity, honesty and transparency, because conscience is an open wound healed only by truth. You must rise and operate above every sentiment that might play out in the course of your adjudication in the various tribunals.

“There is no doubt that temptations, tribulations, intimidations and even sheer blackmails may be unleashed on you but as thoroughbred judicial officers, you must guide your loins to rise above them and do what will earn you accolades from your creator and also from the court of public opinions”, he added.

Ariwoola’s tough stance against the violation of the rule of law and acts of misconduct by judicial officers has rekindled hope in the Nigerian judiciary.

To restore the people’s full confidence in the judiciary, the CJN should match his words with actions. He should ensure that judicial officers no longer look helpless in the face of assaults by the other arms of the government.

Security operatives and the heads of security agencies that violate the orders of the courts should be committed to prison without being given any soft landing. Ariwoola should ensure that nobody is above the law, no matter the number of troops or armed security operatives the person commands.

The CJN should make sure that judges make pronouncements that instill confidence in the judiciary.

The National Judicial Council (NJC) under the chairmanship of Ariwoola, in late last year set up a probe panel to investigate 15 judges of various High Courts. While Nigerians await the outcome of the probe, it will be really interesting to see the CJN match words with actions by not only punishing judicial officers who has breached their oath of office or found to have engaged in corrupt practices but also endeavour to apply the full weight of the law against public officers violating the rule of law, no matter how highly placed.