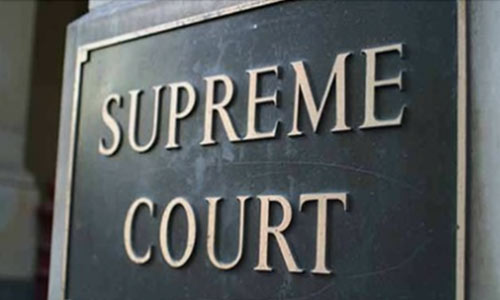 The Supreme Court of Nigeria

The Appellant retained the Respondent, who is a legal practitioner and Senior Advocate of Nigeria, to provide legal and consultancy services in respect of two of its projects at Onne, in Rivers State.

The Respondent’s demands for the balance of N21, 000,000.00 were not met. Whereupon, he filed an action against the Appellant at the High Court of Rivers State, wherein he claimed as follows

Ill. 10% interest on the judgment sum from date of Judgment until the Judgment debt is fully liquidated.

By a Motion Ex Parte filed at the trial Court, the Respondent sought and was granted leave to enter the Suit under the Undefended List. The Appellant subsequently filed its Notice of intention to Defend, wherein it raised the following Preliminary Objections that

After hearing arguments on the Objection, the learned trial Judge, lragunima, J, delivered his Ruling on 14/6/2005, and followed it up immediately afterwards with his Judgment on the substantive Suit. He concluded as follows in his Ruling on the Preliminary Objection

‘’I cannot but come to the conclusion that the Preliminary Objection is misconceived and that the Affidavit in support of the Notice of intention to Defend does not disclose a defence on the merit, in my view, I shall, therefore, pursuant to Order 23, Rule 4, Rules of this Court, 1987, enter Judgment for the Plaintiff in this matter’’.

Its Appeal to the Court of Appeal was dismissed, and the Appellant has appealed to this Court with a Notice of Appeal containing three rounds of Appeal.

Whether the Court of Appeal was right when it held that the High Court of Rivers State had the requisite Jurisdiction to entertain the Respondent’s claim against the Appellant having regard to the Appellant’s undisputed status as an agency of the Federal Government of Nigeria.

NEPA and Appellant are agencies of the Federal Government, established by specific Acts of the National Assembly.

The Judgment in Onuorah’s Case was based on the 1979 Constitution under which a State High Court had unlimited Jurisdiction to hear a wide range of causes/matters including those involving the Federal Government and its agencies.

Judgment in NEPA v. Edegbero was delivered by this Court on 13/12/2002 while the Judgment in Onuoha V. K.R.P.c. Ltd. was delivered by this same Court on 11/2/2005 [27 Months later], and it is also pertinent to observe that although Onu. JSC was a member of the panel that heard the Edegbero’s Appeal, he also presided over the panel that heard the Onuorah’s Appeal.

Edegbero’s Case was neither cited to nor considered by this, Court in Onuorah’s Case, and Onuorah’s Case was not meant to and did not, in fact, overrule the decision in Edegbero’s Case because this Court, as the apex Court, treats its Judgment, especially landmark Judgments with seriousness; and where its Judgment is found to be working hardship on litigants or was reached per in curiam, such a Judgment is usually brought to its attention to decide whether to uphold or overrule it, after a thorough re-evaluation of its merit and demerits.

Such a course of action was taken in Bucknor-Maclean & Anor V. lnlaks Ltd. [200] FWLR [Pt. 85] 398/425, in which this Court’s earlier decisions in Shell BP Company Limited V. Jammal Engineering Company Nigeria Limited [1974] 1 ALL NLR and Owumi V. P. 2. & Co. [Nig.] Ltd. [1974] 1 All N LR [Pt. 2] 107 were revisited and expressly overruled because both decisions did not “accord with justice” and their “consequences could not have been intended by the Legislature”, therefore, the said Onuorah’s Case was decided on its peculiar facts and its citing and reliance upon in this Appeal, is inapposite and unhelpful.

It also submitted that this Appeal presents a golden opportunity for this Court to streamline various interpretations given to the Section 251 [1] of the 1999 Constitution as it concerns this Issue; and in addition, the seeming ambiguity associated with the cases of NEPA V. Edegbero, Onuorah V. K.R.P.C. and Nwanna V. FCDA, on this particular Issue, should also be classified once and for all.

I agree with the Respondent, and I will not hesitate to say so, but before I give my reasons, l must say a few words on the doctrine of stare decisis, which the Appellant appeared to have lost sight of, with its submission that this Court, the apex Court in the Country, should adhere to and follow the decisions of the Court of Appeal. The doctrine of stare decisis “[Latin, “let the decision stand”], also known as “Judicial Precedent”, is defined as the policy of Courts to adhere to the principles established by decisions in earlier cases. Reliance on such precedents is required of lower Courts until such a time as a higher Court changes it, for the lower Court cannot ignore the precedent (even where the lower Court believes it is “bad law”). In other words, the law on disputed points, issues or principles having been decided by a higher Court in an earlier case, the lower Courts are bound by such decisions and are not expected to deviate there-from or change such decisions see Okoniji V Mudiaga Odje (1985) 10 SC 267 at 268-269.

See also Dalhatu V. Turaki (2003) 15 NWLR (Pt. 843) 310, where the attention of the learned trial Judge was drawn to a decision of this Court in a case, which appeared to be on all fours with the case before the trial Court, but he ignored it, which infuriated this Court.

This line of argument offends all known principles of stare decisis. This Court is the apex Court in this Country, and by the doctrine of stare decisis, all Courts are bound to follow decisions of this Court Obiuweubi V. CBN (2011) 7 NWLR (Pt. 1247) 465. The Court below must follow the decision of this Court; not the other way around.

Yes, this Court “has given legal teeth” to the said stand taken by the Court below in FCE, Oyo V. Akinyemi (supra), and this case; that is, the Federal High Court has no jurisdiction to entertain an action on simple contract or debt recovery see Onuorah V. K.R.P.C. (supra) and Adelekan V. Ecu-Line Consortium (supra), cited by Respondent, wherein this Court, per Onnoghen, JSC (as he then was) clearly said:

‘’The provisions of Section 251 of the Constitution of the Federal Republic of Nigeria, 1999 are very clear and unambiguous. It is the section that confers jurisdiction on the Federal High Court, which jurisdiction clearly does not include dealing with any case of simple contract’’.

In effect, this Court has expanded the law beyond the issue raised in the 2002 case of NEPA V. Edegbero whether a State High Court had jurisdiction to entertain matters relating to the administration and management of the Federal Government or any of its agencies.

Clearly, the question of whether K.R.P.C. Ltd. was an agency of the Federal Government was not an issue in Onuoha V. K.R.P.C. Ltd., and it is not the business of this Court to decide whether the use of the word “Limited” in the name of the said K.R.P.C. means that it is an agent of NNPC, and not an agency of the Federal Government. What is more, the issue of whether Onuoha’s Case was based on Section 230(1) of the 1979 Constitution, while this case is based on Section 251(1) of the 1999 Constitution is totally irrelevant because Section 230(1) of the 1979 Constitution is in pari materia, [ Latin, Upon the same subject] with Section 251(1) of the 1999 Constitution. The bottom line is that the Appellant has nothing to hang on. The law is not static; rather it is dynamic and adapts to issues as they come along in the various cases that pass through the Courts of law. In the circumstances of this case, the Court below was right to rely upon the decision of this Court in Onuoha V. K.R.P.C. (supra), which is similar to this case, rather than follow NEPA V. Edegbero. The end result is that this Appeal lacks merit and is dismissed. The Respondent is awarded costs assessed at one Million Naira.