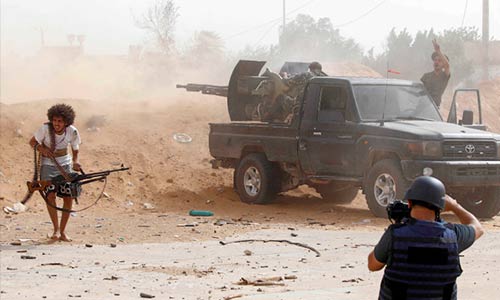 Libyan Foreign Minister Najla Mangoush on Monday met with her Turkish counterpart Mevlut Cavusoglu in the capital Tripoli and called on Turkey to cooperate to evacuate foreign forces from Libya.

“Mangoush called on Turkey to cooperate with regard to the implementation of the cease-fire agreement and the outcomes of the Berlin Conference, including the evacuation of foreign forces and mercenaries from the Libyan lands, in support of Libya’s sovereignty,” said a statement issued by the Libyan government.

The Libyan foreign minister stressed the importance of the distinguished relations between the two countries, and praised Turkey’s support in fighting against the Coronavirus in Libya, the statement said.

Cavusoglu confirmed his country’s support for the Libyan government to maintain the country’s security and stability, explaining that his meeting with the Libyan prime minister included a discussion about the maritime memorandum of understanding signed between the two countries, the statement added.

During a visit to Tripoli on Monday, a Turkish delegation met with the Libyan Prime Minister Abdul Hamid Dbeibah and discussed bilateral relations. (Xinhua/NA