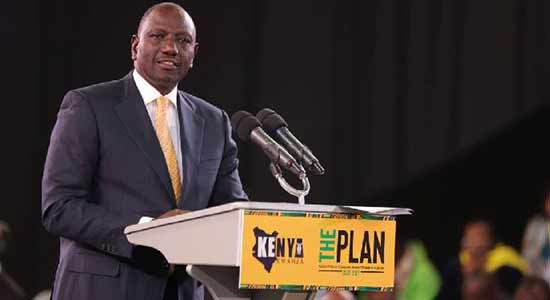 The seven-member court found no discrepancies in the vote tallies and no credible evidence that the electoral commission’s computer systems and transmission network had failed or been breached, Chief Justice Martha Koome said in an abridged ruling handed down in Nairobi, the capital, on Monday. Allegations that some citizens had been prevented from casting their votes or that ballot boxes were tampered with were unproven, she said.

“It is our finding that the declared president-elect attend 50% plus one of the votes cast” in accordance with the constitution, Koome said. “This is a unanimous decision of the court.”

The official results showed Ruto, who has served as deputy president since 2013, winning 50.5% support in the Aug. 9 vote and Odinga, a former prime minister, 48.8%. The judgment paves the way for Ruto, 55, to be sworn in as President Uhuru Kenyatta’s successor on Sept. 13.

While four of the Independent Electoral and Boundaries Commission’s seven members distanced themselves from the election outcome, they didn’t explain why they considered it to have been compromised or substantiate their allegations that the verification process was opaque, Koome said. There is a need for reform at the commission — and details will be provided in the court’s full judgment that will be delivered within 21 days — any dysfunctionality didn’t affect the conduct of last month’s vote, she said.

The court’s decision is a major step toward ending political uncertainty in East Africa’s biggest economy after Odinga’s rejection of the results fanned anxiety among the nation’s bondholders. Investors will be watching closely for his reaction to the ruling, which could determine whether there will a repetition of protests and violence that ensued in the wake of previous disputed votes.

Upholding the presidential election results “is likely to raise investor confidence as a return to normalcy will be in sight,” Nairobi-based AIB-AXYS Africa said in emailed comments.

Odinga’s running-mate Martha Karua said on Twitter that she respected the court ruling but disagreed with it.

Ruto will have his work cut out for him, with the nation’s economic growth rate set to slow this year and the International Monetary Fund warning it is at high risk of debt distress. Kenya’s public debt-servicing costs are projected to climb to 1.39 trillion shillings ($11.6 billion) in the fiscal year through June 2023.

Ruto has pledged to alleviate the nation’s debt burden, while ruling out the option of restructuring its loans — which Odinga had undertaken to do if he won. The president-elect also said he will channel more money into industries with the potential to create jobs for the five million young Kenyans he says aren’t working or studying. That will include investing at least 500 billion shillings in farming and small businesses.

We have always stood for the the rule of law and the constitution.

In this regard, we respect the opinion of the court although we vehemently disagree with their decision today. pic.twitter.com/WfOQrtsnpe

Meanwhile, Kenya’s defeated presidential candidate Raila Odinga said Monday he respected a ruling by the Supreme Court that upheld victory for his electoral rival William Ruto, although he said he disagreed “vehemently”.

“We have always stood for the rule of law and the constitution. In this regard, we respect the opinion of the court although we vehemently disagree with their decision today,” he said in a statement after a unanimous decision by the court.