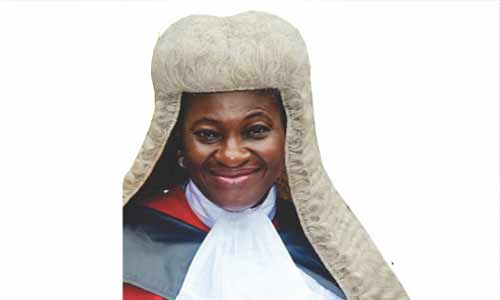 BARELY one month after Justice Doris Okuwobi’s retirement, another judge has bowed out of the Lagos State Judiciary.

Justice Olaide Ajoke Olayinka of the Lands Division, High Court of Lagos State, will today bow out of the Lagos State Judiciary.

She was the 24th judge in the hierarchy of judges.

Her exit will reduce the number of judges in the judiciary from 59 in 2018 to 54 this year.

Justice Olayinka is retiring, having attained the mandatory age of 65 and in line with the tradition of exiting on the retiring judge’s birthday. She served for 11 years, 10 months and 23 days.

She joined the state judiciary on March 18, 2008 and was sworn in as a judge of the High Court in the Lagos State Judiciary by former governor Babatunde Raji Fashola (SAN) along with five other judges.

Justice Olayinka studied Law at the University of Lagos where she obtained LLB (Hons) in 1979.

Thereafter, she attended the Nigerian Law School and was called to the Bar in 1980.

Justice Olayinka started her judicial career in the Lagos State Ministry of Justice as a member of the National Youth Service Corps in the Directorate of Public prosecutions (DPP) between 1980 and 1981 and was appointed a State Counsel in the ministry on July 14, 1981 and retained in DPP where she undertook criminal prosecutions and rendered advisory services.

A diligent counsel, Olayinka rose through the ranks to the position of a Director, DPP in 1999, during which she worked in various capacities.

In 1999 while still a Deputy Director, the then Attorney-General and Commissioner for Justice, Prof. Yemi Osinbajo (SAN), now Vice-President, Federal Republic of Nigeria, seeing her sterling qualities, appointed her as his Special Assistant.

She became Director of the Commercial Law Directorate in 2001 and doubled as the Special Assistant to the then Attorney- General, Prof. Osinbajo.

Olayinka rose to the position of the Solicitor-General for Lagos State and Permanent Secretary, Lagos State Ministry of Justice and served from April 31, 2006 to March 17, 2016. She was sworn into the bench of the Lagos State Judiciary on March 18, 2008.