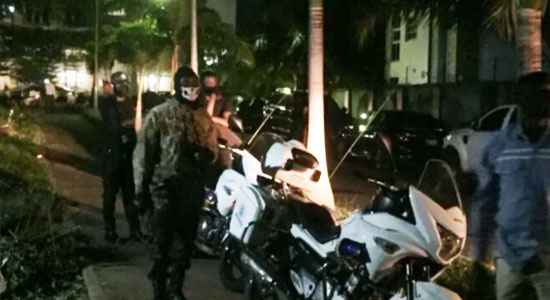 IT is always darkest before dawn. A very cold bowl of discomfort is upon us. Make no mistake about it: The future of our judiciary and its officers is frozen in fear and under assault. Few judicial officers have experienced the darkest moment and the lowest lows in recent times as Justice Mary Ukaego Peter-Odili, a senior ranking member of the Supreme Court of Nigeria. Her husband, Dr.Peter Odili, former Governor of Rivers state (1999-2007) has also faced travails of his own in the hands of overzealous officials of the Nigerian Immigration Service over the seizure of his international passport. His ordeal is not yet over despite a judgment of a Federal High Court, presided by Justice Inyang Ekwo that the seizure of Dr.Odili’s passport was illegal.

But the invasion of Justice Odili’s residence in Abuja, last month has attracted the most talking point. Some foreign media likened the raid to awful practices reminiscent of the Third Reich Germany. How it all happened on that ungodly hour looked like a script from a horror movie: Whodunit? Some “unknown” security personnel had reportedly obtained a search warrant issued by a Chief Magistrate, Mr.Emmanuel Iyanna of Wuse Zone 6 magisterial division, Abuja. The security personnel lied when they claimed in the affidavit deposed to that they were members of a “Joint Panel Recovery from the Federal Ministry of Justice. A whistleblower, by name, Aliyu had sworn to an affidavit, claiming that some illegal activities were going on at No.9 Imo Street, Maitama, Abuja. It turned out to be a roguish ploy to invade Justice Odili’s residence.

The Chief Magistrate had since admitted he made a mistake in issuing the search warrant, just as the Office of the Attorney General of the Federation has denied the existence of any Recovery Panel so-called. Are they saying the truth, or just malice aforethought? Expectedly, since the raid on Justice Odili’s residence failed, reactions have been coming like claps of thunder, all condemning the action, and whoever that was behind it.

Typical of this administration when something goes wrong, nobody wants to take responsibility. Chairman of the Economic and Financial Crimes Commission(EFCC) was the first to wash his hands of the ‘mission unaccomplished’. He swiftly granted TV interviews, saying neither him nor his staff, knew about it. The Attorney General of the Federation, Abubakar Malami, who has always come under a cloud of suspicion in matters like this, in a statement, also denied knowledge of the invasion. The Nigerian Bar Association(NBA) has threatened to derope him of the coveted title of Senior Advocate of Nigeria(SAN) if he failed to investigate what went wrong, and prosecute the culprits.

The Supreme Court, in a strong worded statement, described the raid as “uncivilised, shameful, unwarranted, despicable and impunity taken too far, and a show of primitive fforce on innocent judicial officer”. It said the judiciary should not be misconstrued by any individual or institution of government as the “whipping child among the three arms of government “. The apex Court also said it would carry its own investigation into the matter. How it will do this is unclear. As if to calm frayed nerves, the Inspector General of Police(IGP), Usman Alkali Baba, last week claimed the perpetrators of the act have been arrested. He did not disclose their names.

Many are not surprised that the presidency has remained as cold as ice on the matter. Is it a coincidence that the siege to Justice Odili’s residence came exactly five years after a ‘sting operation’ by officials of the Department of State Service(DSS) on the homes of Justices John Okoro, Sylvester Ngwuta, Nnamdi Dimgba, Liman Mohammed and Adeniyi Ademola of the Federal High Court, Abuja. Justice Ngwuta never recovered from the trauma. He died.

It’s not the first time that Justice Odili had faced such horrendous experience. Recall that on February 18, 2019, a mob, carrying placards, ostensibly protesting the Supreme Court judgment that upturned the victory of David Lyon as Bayelsa governor-elect, in the case against the Deputy governor-elect, Biobarakuma Degi-Eremienyo, invaded Justice Odili’s residence, in Abuja. Her ‘offence’? She headed a panel of five Justices of the Supreme Court that nullified David Lyon’s election, a day before inauguration. None of the culprits was arrested in what was clearly a debase of the rule of law.

Why should we be worried about the present raid on her residence? Failure to get the culprits and prosecute them may lead to another attack on her safety and liberty. Liberty of an individual is the essence of human nature. Take it away, there will be darkness, frustration, decay and societal death. I have this inward intuition, a very disturbing one, that those who planned the invasion of Justice Odili’s residence are coming back. They have only retreated to restrategize. Complex situations create many possible courses of action. If one plot fails, try another. Don’t forget that she is the second most ranking Justice of the Supreme Court after the current CJN, Tanko Mohammed.

The grand plan could be to serve her the same dose of poison meted to immediate past Chief Justice of Nigeria, Walter Onnoghen. You see, unconventional strategy is what deviants use against perceived enemy. Unconventional strategy is not scientific. It lacks the creation of hypotheses and the careful generation of ideas. The executioners must find or invent some incriminating items and illegal activities in her residence that they must present to their sponsors to begin a vicious cause of action. To Justice Odili, I say: Beware, the invaders are coming back, they are snapping at your heels.

Sadly, some members of the president’s Cabinet have made him a ‘prisoner’ in Aso Rock Villa. That’s why the presidency is tight-lipped on the matter. One man who has done a lot of harm to the President is the Attorney- General and Minister of Justice, Abubakar Malami. As the nation’s chief law officer, it is his responsibility to ensure that the president gets the right counsel and a correct interpretation of the law. But has Malami been living up to this responsibility as Nigeria’s Chief Law Officer? I think he has always shown a proclivity to misinterpreting the law.

Recall last December, Malami shocked many when he said that the National Assembly had no powers under our Constitution to summon the President over his “operational use of the Armed Forces”. This is in spite of sections 217, 218 and 219 of the 1999 Constitution(as amended) that empower the parliament to summon the President to answer pertinent national questions. As always, he got away with it.

When a serious error goes unpunished, more serious errors are willfully committed. As many legal experts have said, the Attorney-General has never been objective on critical matters in the Constitution. So, his denial of the invasion of Justice Odili’s residence should be taken with a pinch of salt. The raid on Justice Odili’s residence was an assault on the judiciary, and a hammer blow on our democracy. It was an exercise in raw power.