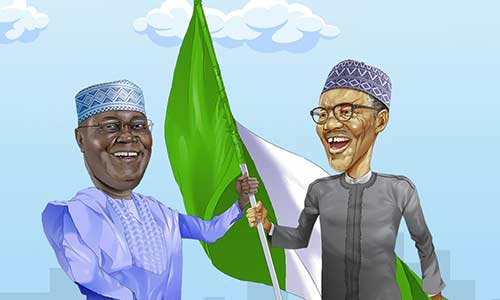 After six months of mounting anxiety, the Presidential Election Petitions Tribunal will today, in Abuja, deliver judgment in the petition of the presidential candidate of the Peoples Democratic Party (PDP), Atiku Abubakar, challenging the declaration of President Muhammadu Buhari as winner of the February 23 presidential poll.

The tribunal had in a notice of hearing conveyed to parties in the petition through text messages and telephone calls, announced its resolution to make its findings and final decision on the petition public today.

The Court of Appeal’s public relations officer, Mrs. Sadiat Kachalla, confirmed it in a notice of judgment in Abuja.

The tribunal had on August 21 reserved judgment on the appeal after parties adopted their addresses.

Justice Mohammed Garba, chairman of the five-man panel of justices, had stated that the judgment date would be communicated to parties.

The tribunal would have to rule on all pending interlocutory applications filed by parties before delivering judgment on the main appeal.

Atiku and the PDP had, on March 18, dragged the Independent National Electoral Commission (INEC), Buhari and the All Progressives Congress (APC) before the tribunal, praying for the nullification of Buhari’s election on various grounds, ranging from Buhari’s ineligibilty to stand for the election, election malpractices, alteration of election results and violence, among others.

To establish his petition, Atiku, during the hearing, called 62 witnesses and tendered over 4,000 documents and video clips before the tribunal, while Buhari, on the other hand, called seven witnesses and also tendered documents to prove that he won the election.

The APC and INEC did not call any witness but chose to use the evidence of the petitioners’ witnesses to support their defense.

The petitioners had, in the last stage of the hearing, alleged Buhari used fundamental falsehood to secure clearance from INEC to participate in the poll.

Atiku, in his final address, insisted that Buhari, as candidate of APC, lied on oath in his form CF001 presented to INEC before standing for the presidential election.

In the final address presented on his behalf by his lead counsel, Dr. Levy Uzuokwu, SAN, Atiku drew the attention of the tribunal to a portion of the INEC form where Buhari claimed to have three different certificates: primary school leaving certificate, WAEC certifcate and officer’s cadet certifcate.

“More worrisome is the fact that Buhari’s own witness, Major General Paul Tafa (retd), who joined the Nigerian Army with him in 1962, told the tribunal that they were never asked to submit their certificates to the Nigerian Army Board, as claimed by Buhari in his form CF001.

“At any rate, the secretary of the Nigerian Army Board, Olatunde Olaleye, had in a statement clarified that Buhari had no single certificate in his personal file with the Nigerian Army.”
Atiku, therefore, urged the tribunal to nullify the participation of Buhari in the election on the grounds that he lied on oath to deceive Nigerians and to secure qualification for the election.

The former Vice President informed the tribunal that Buhari’s claims that he could read and write in English language as enough qualification for him was of no significance because ordinary artisans on the streets of Nigeria could also do so, adding that a grave allegation bordering on certificate infractions was not addressed by Buhari as required by law.

The PDP presidential candidate also faulted INEC’s claim that it had no central server, adding that the server was a storage facility, including computers, where database of registered voters, number of permanent voter cards and election results, among others, were stored for reference.

He said the claim that INEC had no device like a server to store information was “laughable, tragic and a story for the dogs.”

Atiku’s lawyer, in the final address, debunked the claim of INEC that collation and transmission of results electronically was prohibited by law in Nigeria.

He, therefore, urged the tribunal to uphold the petition and nullify the participation of Buhari in the election on the grounds that he was not qualified to have stood for the election in the first place, in addition to malpractices that prompted his declaration as winner of the election.

However, INEC, represented by Yunus Usman, SAN, urged the tribunal to dismiss the petition with substantial cost because the electoral body conducted the election in total compliance with the Nigerian Constitution and the Electoral Act, 2010.

Usman insisted that INEC did not transmit election results electronically because doing so was prohibited by law and the commission did not call any witness because there was no need to do so.
Meanwhile, both the APC and PDP have expressed confidence that the ruling will be in their favour.

“We have reason to doubt that it will go in our favour because the PDP were not able to put up any legal resistance. We have to thank the PDP for helping us to prove our case beyond all reasonable doubts.

“We are hopeful that since we didn’t have to waste our time and they have nothing to contradict our claims like the issue of certificate by the President, which they could not bring anything to show that it is not genuine either from WAEC or Cambridge, they did us favour.’

But the candidate of the PDP, Atiku Abubakar, who spoke through his media aide, Paul Ibe, said having proved his case before the tribunal, his expectation is that the tribunal will render justice.

“We are hopeful. We are expectant. We are hopeful that the tribunal will render justice. But let us remember that this was never about Atiku Abubakar. This is about Nigeria and Nigerians. And about an opportunity to reset this country, to chart a better future for our people. This is what it is about. It is not about Atiku.”

A group under the auspices of Democracy Vanguard of Nigerians in Diaspora urged the tribunal to be “courageous, firm, just and equitable” in delivering its verdict on the 2019 presidential election.

In an open letter made available to newsmen in Abuja and signed by its President, Timothy Sule, the group specifically advised the judges to toe the path of integrity, honour, good conscience and equity.

At the time of this report security has been beefed up within the vicinity of the Court of Appeal Headquarters, serving as venue for the tribunal.