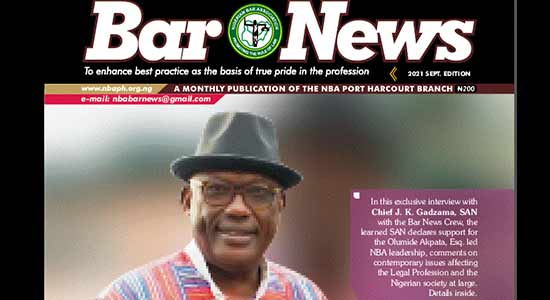 The new edition features a number of events and trending news across the country. The Novelty Match played in honour of Lawyers who emerged victorious at the just concluded Local Government elections in Rivers State is one of the events featured in the September edition of the Bar News.

It also featured an exclusive interview with Chief J.K. Gadzama, SAN. Gadzama, in the interview, ascribed his success at the Bar to God Almighty and as the first Senior Advocate of Nigeria from Borno State and the North Eastern Zone, he believed God led him through.

When asked why he is dressed in full Rivers native attire, and what informed his dress pattern? The learned silk noted that most of his friends both senior and junior colleagues are from Rivers State.

The learned silk during an interactive session with the Bar News also threw his weight behind the Olumide Apkata led Bar, describing same as success.

Also featured in the Bar News is the pardon granted to over one hundred and sixty inmates from the Port Harcourt Maximum Correctional Service as part of Decongesting the prison and the legal battle between Rivers State and Federal Government on Value Added Tax.

The Tour on the ongoing construction of the Port Harcourt Campus of the Nigeran Law School by the Director-General was also featured.

The new edition of the Bar News also contains testimonies of Lawyers on how Chief J.K. Gadzama, SAN mentored them among others.

Kingsley Nyesom Chinda when asked of his view about Chief J.K. Gadzama, SAN describes the learned silk as a legal practitioner that needs no introduction and holds the view that he is most accessible to young lawyers. Also, Orowhuo W.A. Okocha, Esq., PhD described Chief J.K. Gadzama, SAN as an illustrious legal practitioner whose reputation precedes him. Sam Aiboni, Esq., described Gadzama SAN as an icon to reckon with. Tamuokuro Akuro George, Esq., on his part described J. K Gadzama as an inspiration to Young Lawyers.

Nigerians Will Continue To Look Up To Judiciary For Succour NBA President, Olumide Akpata stated while addressing the Bar. He also noted that Peace is not the absence of war but the presence of justice. He, however, condemned the attitude of lawyers who are been use by the politicians as tools to bring the profession to disrepute while calling on Courts to do everything within its powers to forestall future attempts to ridicule our justice system.