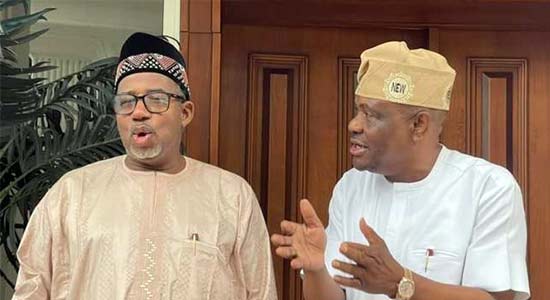 Presidential candidate of the Peoples Democratic Party (PDP) for the 2023 general election, Atiku Abubakar, has commenced some rapprochement to pacify the Rivers State Governor, Nyesom Wike.

As part of the peace moves, Atiku sent one of his closest political allies and Governor of Bauchi State, Senator Bala Mohammed, to see Wike in Port Harcourt, the state capital.

The Bauchi State governor, during the visit at Wike’s country home in Port Harcourt, came with National Vice Chairman of the party in the South-south zone, Dan Orbih and a former Attorney General of the Federation, Mohammed Adoke

The peace team, was set up to pacify the Rivers governor and explain to him why the presidential candidate of the PDP did not choose him as his running mate.

Wike came second in the PDP presidential nomination primary election with 237 and Atiku came first with 371, after the governor of Sokoto State, Aminu Tambuwal, stepped down for Atiku.

But in the run-up to the choice of the vice presidential candidate, Atiku picked the Governor of Delta State, Ifeanyi Okowa as his partner, even after Wike was said to have won a committee election to decide the candidate.

Our correspondent gathered that PDP feared Wike might work against Atiku’s ambition following his loss as the party presidential candidate and running mate.

Political pundits thought that Atiku would have picked Wike, but he chose Okowa as his running mate, a development, which sparked talks that Wike might defect to another political party or work against the interest of the PDP.

It was, therefore, to ensure a united party that Atiku commenced a rapprochement to pacify Wike and present a united party ahead of electioneering for the 2023 general election.

A source privy to the reconciliation moves told THISDAY that apart from a united party, which Atiku was working for achieve during the campaigns, the committee would unveil to Wike what he stood to benefit should Atiku win the presidential election.

“After the crowning of a prince, all the other heir apparent will close ranks for the success of the king-elect. What Atiku may not want at this moment is a divided PDP and a united campaign structure.

“There are top ministerial positions that are being dangled before Wike and other benefits like the role he will play during the electioneering campaigns,” the source said.

It was gathered that the committee would also meet with other members of Wike’s political camps, as the reconciliations could not be complete with Wike alone.