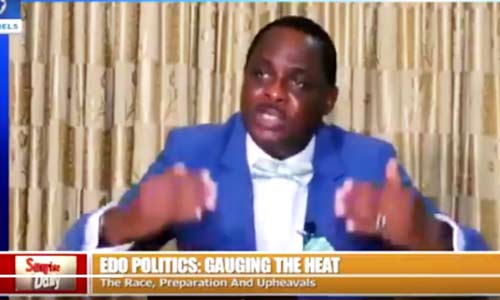 A lawyer and Senior Pastor of Gloryland Assembly, Mr. Collyns Okonofua, has defended the action of the 17 pro-Ize-Iyamu/Oshiomhole lawmakers of Edo State House of Assembly who met at an undisclosed location on Thursday 6th of August, 2020 and impeached Mr Frank Okiye, the Deputy Speaker of the House and inaugurated the 14 members of the camp whose seats were declared vacant in 2019 by governor Obaseki.

Justifying the action of the 17 lawmakers, Okonofua, Esq in an interview at Channels Television monitored by TheNigeriaLawyer (TNL), said the lawmakers will not get justice if they go to court

“Illegality begets illlegality, that’s the truth. Illegality has become so obvious. You go to the court, for some reasons and by some means, the court has been compromised – I am sorry to say this.

“These lawmakers know they cannot get justice. These guys cannot stay out of their jobs for which they were elected just the same way Governor Obaseki was elected.”

In another breath and obviously contradicting himself, Okonofua, Esq said the action of the 17 lawmakers was not illegal as same has not be declared so by court.

“The Attorney-General gave instruction to the Commissioner of Police in Edo State the instruction to give backing to these members to get into the house. The position of the law is that they are free to enter into the House and perform their functions” he added

Okonofua, Esq also justified his position that courts have been compromised. He said “to a large extent we know that when you go to the High Court in a particular state for instance asking for judgment against the government of that state, you are not very likely to get judgement.”

Good morning Learned Silk. I want to bring a matter to your attention and to the attention of your new @NigBarAssoc President @OlumideAkpata

One of your members came on TV to disparage the Courts & advocate for jungle justice. pic.twitter.com/CMTadCRdrS