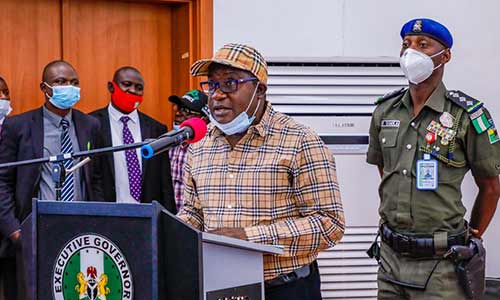 Governor Simon Lalong of Plateau State has said he won’t hesitate to sign the execution of anyone convicted of kidnapping in the state.

The governor made this known on Thursday in a statement issued by his Director of Press and Public Affairs, Macham Makut.

Lalong noted that there had been an increased incident of kidnapping in the state.

He cited the rescue of the Gwom Rwey of Vwang District, Da Gyang Gutt Balak shortly after he was kidnapped and the arrest of some suspects as a good development that is worth sustaining.

He noted that a similar situation had also happened when three students of the Plateau State Polytechnic Barkin Ladi were rescued shortly after being kidnapped from the school in Heipang.

The governor also recalled the abduction of the wife of the Deputy Chief of Staff and a Medical Doctor among others, who were also rescued by security forces after being kidnapped and some suspects also arrested recently.

Part of the statement read, “Plateau State Governor Simon Bako Lalong has commended security personnel in the State for rising up to the occasion and thwarting the attempts by kidnappers to create fear among citizens.

“Governor Lalong in a message said he was glad that the swift response of the security forces to distress calls of kidnap incidents led to the dislocation of their operations leading to rescue of some victims and arrest of suspects.”

The Governor urged the security agencies which include the Police, DSS, Operation Safe Haven, Operation Rainbow, NSCDC, other paramilitary agencies, and vigilante groups to sustain the heat on the criminals, assuring that the “government will do everything possible to continue to provide support for them to flush out kidnappers and other criminals from the state”.

Lalong also assured that he “will not hesitate to sign the death warrant for any convicted kidnapper who is found guilty of the crime as the law against kidnapping signed last year stipulates the death penalty which is ready to be implemented”.

The governor also called on citizens of Plateau State to support the security agencies with intelligence that will enable them not only to respond, but pre-empt the activities of criminals who are desperate to disrupt the peace of the state.