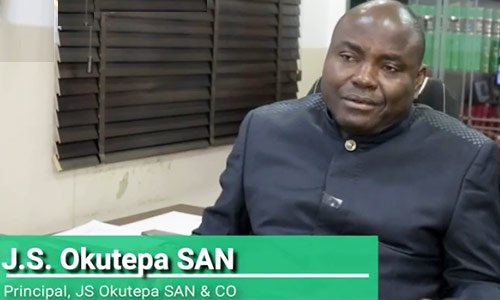 According to him, there is more to be done in order to save NBA from disunity in the face of imminent threats to the existence of the Association.

Meanwhile, he stated that the election was fraught with irregularities and constitutional breaches.

“The second is that article 2.3 (d) of the second Schedule of the NBA constitution amended under Paul Usoro-led executive provides that the full list of all legal practitioners qualified to vote shall be published by the electoral committee of the NBA in conjunction with the national secretariat of the NBA at least 28 days before the date of the election. What did we see in this election? The list was not published until three hours to the election. That is another constitutional sacrilege.” He said.

“The third point is that it is also a notorious fact that while electoral committee set guidelines prohibiting movements from states and there was also COVID prohibition of movement, some of these candidates were traveling and the electoral committee of the NBA was just there like a toothless bulldog. It was only barking but didn’t bite. The legal profession should be the one that ought to set that standard because it is a profession that is rooted in ethics and standards, and once there is deviation or breach of the ethical standards, we must visit whoever is involved with sanction, no matter whose ox is gored.” He said.

However, the learned silk stated that he won’t advise that the Court should be approached owing to antecedents.

“Nigeria is a society that does not respect gentility. I will not even advise Mr Adesina to go to court.

“Two previous cases went to court and those people served out their tenures without justice being served. All we got from the courts were judgments. And there is a world of difference between justice and judgments.” He said.

However, he stated that the constitutional issue to be addressed is the compulsory membership of the NBA. That is, whether Mr. Adesina, SAN should not have a right to exercise his right to freedom of association if he so wishes.

“There are raw procedures for raw people. When people are being rough and the voice of reasoning is being termed as a voice of somebody who cannot stomach a loss, then you take a decision.

“When leadership is determined by the quantum of money in your pocket, and not the integrity you possess, some of us will say goodbye.

However, he advised that the electoral malpractices should be addressed through a leadership meeting of the NBA.

“I have advice for the leadership of the legal profession, and I mean both the senior and the younger ones, (and) those who mean well for the legal profession, to think deeply and address these flaws that I have identified. Nobody should be ignored. Let the leadership call for a meeting and chart a way forward. After all, it was done sometime in 1998.

“If the complaints of lawyers who are genuinely concerned by the integrity and the sanity of the profession are undermined, the only thing you will find is that we will walk away.”