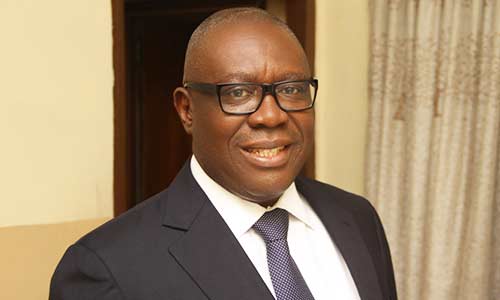 A former Attorney-General and Commissioner for Justice, Mr. Ekpenyong Ntekim has declared the Chief Judge of Akwa Ibom State, Hon. Justice Godwin Jack Abraham unsuitable to continue to sit as a judicial officer in the State High Court.

Ntekim, who is the principal partner in Elizabeth Chambers , Uyo, said the State CJ has exceeded the mandatory retirement age of 65 years and is now 66 years old.

The former Attorney General said he drew his position from the CJ’s personal data supplied by him in his Nigerian Passport No.A0557702 which indicated clearly that he was born on the 28th of June 1954, which means that his tenure in office had since expired on the 28th of June, 2019.

The observation was made in a written address to Mr. Ntekim in support of the Motion on Notice in Suit No: HU/LA.1/2018 filed in the High Court of the Uyo Division of the State.

Ntekim, who is the lead counsel to the defendants/applicants, in the written address in support of the Motion on Notice, dated February 14th, 2020 drew the attention of the Presiding Judge, Hon. Justice Abraham to Section 291(2) of the Constitution and Section 3 of the High Court Laws of Akwa Ibom State by which provisions he was no longer has personal capacity or jurisdiction to discharge any duty of the office either as a Judge or the Chief Judge “except that which is conferred on him by the fact o the currency of his tenure as a Judicial Officer under the voluntary retirement age of 60 years”.

Where, however, according to Mr. Ntekim, “he has the grace of reaching 65 years, as Exhibit A shows, he automatically and ineluctably loses the qualification and personal jurisdiction to be or sit as a Judicial Officer” and cannot, therefore, act in the discharge of any duties as both a Judicial Officer or Chief Judge. Exhibit A attached to the affidavit of the defendants/applicants is the data page of Justice Abraham’s Nigerian passport No. A05577022.

The former Attorney-General and Commissioner for Justice in the State asked the CJ to determine whether he can continue to sit as a Judge and also sought the relief:

In an affidavit in support of the Motion on Notice deposed to by the first defendant/applicant and on behalf of the second defendant/applicant, Mrs Imaobong Michael Ekpombuk, stated that the CJ’s tenure had expired since June 2019.

In the affidavit dated 27th February, 2020, the first defendant said, “By my calculation, the Hon. Justice Godwin Jack Abraham is 65 years old having been born on the 29th of June, 1954 as stated by him in the data page of his Nigerian Passport No.A05577022 hereto exhibited and marked as Exhibit A, and his tenure in office expired since on the 28th June 2019 when he attained the mandatory retirement age of 65 years.

“In the light of the information stated above paragraphs of this affidavit, and my old age, ill-health and poverty, I do not want to manage a defence of this action to end only to have whatever decision on it set aside on grounds of the age and compulsory retirement of Hon. Justice Godwin Jack Abraham.

“I therefore crave the indulgence of this Honourable Court to have this matter determined early enough for the guidance of the parties herein and the Akwa Ibom State High Court “.

The matter, which came up on 3rd March 2020 has been adjourned to 11th March 2020 because the Chief Judge, Hon. Justice Abraham, who is both a Respondent and presiding over the matter, said he was not served.

The lawyer to the Claimants, Mr. Augustine Ekpo, confirmed that the Claimants had been served with the Motion.

A source in the High Court Registry, Uyo confirmed that the Chief Judge, Hon. Justice Abraham was served with a copy of the Motion on 3rd March 2020 immediately after the Court sitting.

The State Chief Judge could not be reached for his comments as phone calls and text messages sent to him by our correspondent were not responded to.