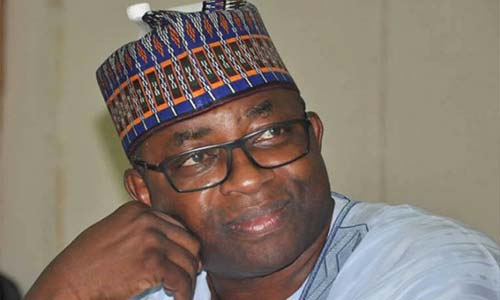 The immediate-past governor of Bauchi State, Mohammed Abubakar, has said he only approved the transfer of N8.9bn and not N19.9bn from the state government’s account two days to his handover on May 29, 2019.

In a court document seen by The PUNCH on Sunday, Abubakar said the N8.9bn he approved was not for laundering as alleged by the Economic and Financial Crimes Commission but for contractors engaged by the state government under his watch to construct some Federal Government roads worth N14.6bn in the state.

But the EFCC has faulted the ex-governor’s claim, stating that about 20 cheques issued for overdrawing money from the state government’s account were in the name of “the bank manager” and not contractors.

It added that many of the contracts listed in the schedule of payment were not executed.

Abubakar had made the fresh claims in an application he filed before the Federal High Court in Abuja seeking to be joined as a party to an EFCC’s suit which requested the freezing of the Bauchi State Government’s account with First City Monument Bank.

The anti-graft agency had prayed the court to order the freezing of the account to enable it to investigate Abubakar whom it accused of overdrawing as much as N19.9bn from the FCMB account in the twilight of his administration as governor.

Justice Taiwo Taiwo of the Federal High Court in Abuja granted EFCC’s request for the freezing of the FCMB account on August 5.

Abubakar, on August 16, filed an application to be joined in the suit.

An affidavit filed in support of Abubakar’s application stated, “Further to the above depositions hereof and in specific response to paragraph 4, it is not true that the Bauchi State Government under my watch initiated any process of overdrawing the account to launder the sum of N19,897,809.08.

“Illustrative of the falsity of the respondent/applicant said assertion is the schedule of payment herein attached as Exhibit MAA 2 which put the total sum to be paid to creditors at N8,901,002,855.83.”

The EFCC had said it received an intelligence showing that between May 24 and 28, 2019, Abubakar, the then outgoing governor of Bauchi State, “initiated a process of overdrawing to launder the sum of N19,897,809,334.08” in the state government’s FCMB account.

Justice Taiwo on August 5, 2019 granted EFCC’s request to freeze the state government’s account, and ordered the Bauchi State Government and the bank to justify their interest in the balance in the account within 21 days.

Neither the Bauchi State Government nor the First City Monument Bank Plc, the custodian of the account, has filed any processes to oppose the freezing order as of the last hearing in the case.

But in response, Abubakar, through his lawyer, Muritala Abdul-Rasheed, filed an application seeking to be joined as a party to the suit.

The affidavit filed in support of the application was deposed to on behalf of Abubakar by Olamilekan Adebayo, a litigation assistant in the law firm of the ex-governor’s lawyer.

The affidavit stated that the N14.6bn expended on the Federal Government’s infrastructural projects by the state government was to be refunded through promissory note approved by the National Assembly.

It noted that the National Assembly’s approval only came on May 23, 2019 and other procedures involving the Minister of Finance further delayed the payment to the state government.

It added, “The entire process was concluded on May 27, 2019 (two days to the transition to the new administration) on which day the money dropped in Bauchi State Government Operational account number 0998552074 domiciled at First City Monument Bank.

“With the assurance that value will be received, the Accountant-General prepared a schedule of payment and issued instruments for sundry payments totaling N8,901,002,855.83 which payment was approved by the outgoing State Executive Council under my watch as the Executive Governor.”

Meanwhile, the EFCC, through its lawyer, Abubakar Aliyu, opposed the ex-governor’s request to be joined in the suit, insisting that the claims in his affidavit “are not in good faith”.

Faulting the ex-governor’s claim that the money drawn from the FCMB account was for contractors, the EFCC stated in its counter-affidavit, “The Exhibits EFCC 1 – 20 attached to our motion ex parte are the First City Monument Bank cheques issued in the name of the manager instead of contractors overdrawing the funds.”

It also said that its investigations so far had shown that “many contracts contained in the schedule for payments (Exhibit MAA2) are not executed”.

Insisting that there was no justifiable reason for the former governor to be joined in the suit, the commission stated that “the applicant (the ex-governor) cannot be personally affected directly or indirectly by the outcome of the suit, the Bauchi State resources are not his personal assets”.

The case came up before Justice Nkeonye Maha, sitting as a vacation judge, on September 3 for hearing, but the judge transferred it to Justice Taiwo who issued the order for the freezing of the account on August 5.