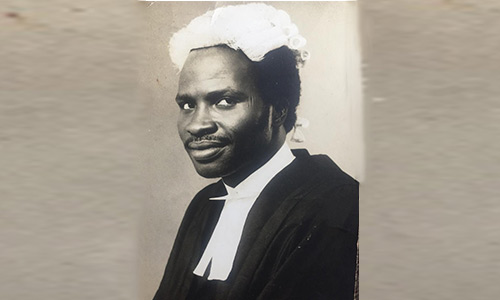 In honour of Adamu Audu Maikori Esq, House of Justice has presented the fundamental rights in the Nigeria constitution in Hyam, a language in Southern Kaduna.

Presenting the Constitution at the Kpop Ham palace on 19 September,2020, Gloria Mabeiam Ballason Esq, the C.E.O. House of Justice said her team were at the Palace to commiserate with HRH Danladi Gyet Maude, OON on the loss of an illustrious son whose pioneering acts were beyond inspiring.

She said HOJ was presenting the Mi Kpu Jee (I Have Rights) translation of the Constitution and the education in learning and character advocacy souvenir to the Ham Chiefdom because Maikori who began his education in rural Maude Primary School, Kwoi went on to become a global citizen and acquired premium education in London, Germany, and Havard in the U.S.A. Stating that it was unfortunate that far less rural kids are able to aspire such heights as the inspiration to have more Maikoris was being frustrated by the blistering insecurity in the area.

“Nonetheless, House of Justice hopes that just as Maikori fully exercised his fundamental rights especially of life and living in dignity and toured many countries to acquire a globally relevant education, we pray that the Kpop Ham who is in his 50th year of rule will witness a kingdom where people will not only survive but thrive and become globally relevant.” 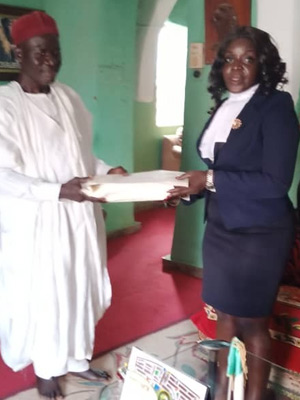 Responding on behalf of the Chiefdom, the Santalin Ham thanked the HOJ team stating that the Chiefdom is inspired by the thoughtfulness and solidarity.

Adamu Audu Maikori was the first indigenous lawyer from Southern Kaduna. He led a brilliant service life in the Ministry of Justice as Director of Public Prosecutions and then at the Judiciary as Chief Registrar of the Kaduna- Katsina High Court. Maikori swerved to the private sector as Executive Director of Nigeria Merchant Bank and then as co-founder of North-South Bank.

He contested the seat of Governor of Kaduna State in 1990 and of the Senate in 2003 and 2007. He is survived by his wife and five children two of whom, Yahaya Maikori and Audu Maikori are accomplished lawyers.