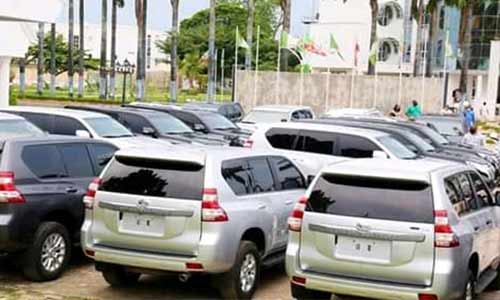 The Governor made this known during a courtesy visit by the Judges. He said that the gesture was necessary so as to bring about a harmonious working relationship between the judiciary and the other arms of government in Imo State. He stated that dividends of democracy can only be delivered to the people when the Executive, Legislative and Judicial arms of government are working harmoniously.

Governor Uzodimma presented vehicle gifts of 20 brand new Sports Utility Vehicles (SUVs) to the serving Judges as a way of motivating them to work. He noted that Imo State Judges have not been treated well by past administrations and pledged to change the narrative.

The Governor who did not only stop at presenting vehicles to the Judges, also offered to take care of the outstanding entitlements of the retired Judges and ensure that other retiring ones get their entitlements a month or two after retirement, a record which has not happened in the history of Imo State.

Governor Uzodimma spoke about job security and dignity for the serving Judges, adding that a good operational environment for them would be paramount in his administration.

Governor Uzodimma stressed the need for love to prevail among the judicial officers, hatred and acrimony must be avoided. He stated that love plays important role and contributes to strengthening the economy and fostering synergy among workers.

The Governor stated that he is committed to introducing modern techniques to quicken justice dispensation and urged the Judges to key into the administration and do their work without fear or favour.

The Acting Chief Judge of Imo State, Justice Ijeoma Agugua, while speaking on the purpose of their visit said they came to parley with the Executive represented by the Governor on how best to ensure harmonious working relationship between the three arms government.

She commended the Governor for making the Judiciary come alive again in the discharge of their duties as people entrusted with dispensing justice for the common man, promising not to be found wanting.

The Acting President of the Customary Court of Appeal of Imo State, Justice Matthew Njoku praised the Governor for his magnanimity to the judiciary in such a short period.

Njoku thanked Governor Uzodimma for “wiping away their tears and removing the shame they have faced in the past before their counterparts from other States.” He prayed for God’s guidance and protection for the Governor.