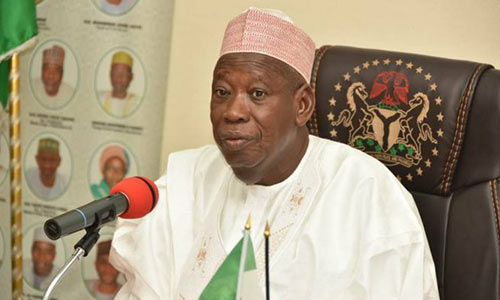 The governor of Kano State, Abdullahi Ganduje, on Thursday inaugurated an eight-man Anti-Corruption Strategy Steering Committee towards curbing corrupt practices in the state.

The governor said that the committee was set up to reduce corruption through deepening accountability, transparency and adherence to the rule of law.

Mr Ganduje, who was represented on the occasion by Usman Alhaji, the Secretary to the State Government, noted that the committee was also meant to strengthen capacity for integrity and accountability.

According to the governor, Nigeria cannot develop or progress with the level of corruption in the country.

“Believe me, we don’t need to say that corruption in this country is killing all of us.

“The truth of the matter is that we will never develop or progress with this level of corruption in this country,” the governor cautioned.

He said that Kano state under his administration had held the bull by the horns in the fight against corruption.

The governor stated that by strengthening the Public Complaints and Anti-Corruption Commission, PCAC, it was doing its job without interference.

Mr Ganduje noted that the state government had accorded all necessary support to the PCAC in the fight against graft.

According to him, there is no sacred cow in the fight against corruption in the state, saying two of his commissioners lost their seats after being found wanting.

The governor expressed delight with the setting up of the committee, describing it as one of the most important committees in the state’s anti-corruption crusade.

“I want to say that this committee is one of the most important committees we will inaugurate. My reason is that this organisation has a dual role and responsibility.

“Its first role is of course public complaints. That means, people with some complaints could lodge it at the commission, get it sorted out and resolved amicably. This is not what you can call a crime.

“On the other hand, anti-corruption is of course a fight against crime, which means, the double role should not be misconstrued or lost, that is the fight against a crime.

“So, I urge the committee to bring out the strategies whereby the people of Kano State would have the benefit of hope to complain when the need arises, and get amicable settlement.

“Whether it is against the government or government officials, the complaints could be looked into and sorted out,” he said.

“The strategy was designed to intervene at the legal policy, strategic and institutional levels, the private sector and the society in general.

“At the policy level, the ultimate objective is to put in place a system which promotes an increased alignment of private and public interest, while at the institutional level, laws and measures designed by the Nigerian government, state government and local councils.

“This is to prevent and combat corruption as well as engage the public more actively in the process.

“The strategy seeks to develop and implement mechanisms aimed at improving the governance of public institutions at state and local government levels.

“It is meant to remove corruption related factors inhibiting their accessibility and capacity to deliver quality services to Kano citizens,” Mr Rimingado added.