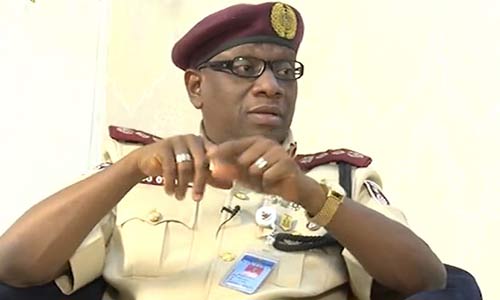 The Federal Road Safety Commission (FRSC) has condemned incessant attacks been metted out on Its members across the country.

This is contained in a statement titled “PUBLIC HARASSMENT OF FRSC PERSONNEL AND DAMAGE TO FRSC PATROL VEHICLE BY TRICYCLE OPERATOR IN BENIN, EDO STATE” signed by Bisi Kazeem fsi, the Assistant Corps Marshal, Corps Public Education Officer and made available to TheNigeriaLawyer (TNL).

The statement said that an FRSC personnel was attacked at Benin, Edo State. Recounting what transpired, FRSC said it “has noted with dismay the unruly, defiant and rebellious attack that resulted into an unprecedented degree of damage to both FRSC personnel detailed on patrol operations and the patrol vehicle by a tricycle operator in Benin, Edo State.

“The tricycle rider who was arrested in Benin, along Benin/Sapele road for driving against traffic, went berserk at the point of arrest, stripped himself naked, and started throwing obstacles on both personnel and the patrol vehicle while at some point, even dragged the patrol operatives in uniform. During the attack, the man tore the staff’s uniform and not only damaged the windscreen of the patrol car, but disfigured the bonnet and other body parts with mud and stone.”

“The Corps wishes to register its displeasure at the incessant abuse of its personnel and damage to its property across its formations nationwide by unruly people and warns that this, like other unwarranted attacks, is highly unacceptable and the Corps will do everything within its legal strength to ensure that this act does not go without due punishment under the law.

“After going through the viral video, the Corps wonders why a section of the motoring public has continued to abuse unarmed personnel whose only fault is to ensure the safety of lives and property on the road? The Corps has therefore resolved never to condone such barbaric acts and damage to either its personnel or patrol vehicles any longer and is prepared to use this case to serve as a deterrent to others who are fond of molesting law enforcement agents.

“It is also disheartening that a section of the motoring public could criticize the Corps personnel who in self defence, applied some commensurate force on the criminal in question in order to restrain him from further attack on the unarmed personnel and damage to the patrol vehicle. The motoring public is hereby warned to note that , though the FRSC is civil in nature and discourages physical attack on offenders, this does not mean members of the Corps should watch and allow physical damage on its property and personnel in the course of their legitimate duty..”

The Corps commended the people that assisted in arresting the perpetrator of the attack adding that it shows some Nigerians will always stand by the truth. The Corps further disclosed that it has ordered the prosecution of the suspenct

“The Corps Marshal, Dr Boboye Oyeyemi however commends the patriotic citizens that assisted in arresting the criminal and condemned his actions. This shows that some Nigerians will always stand by the truth and nothing but the truth.

“The Corps Marshal, has also ordered the prosecution of the perpetrator of that crazy act of humiliation and recklessness on law enforcement agents and noted that offenders who take undue advantage of unarmed personnel will not be spared any longer.

The Corps Marshal wishes to remind members of the public that law enforcement agents serve the common interest of the general public and deserve to be respected and not humiliated in the course of their duty.” The Corps said