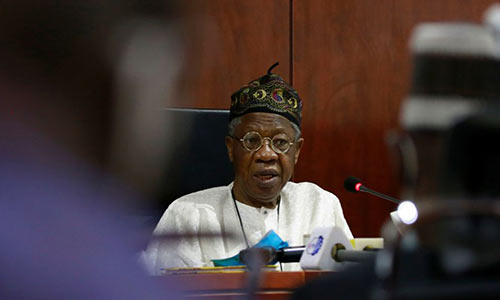 The federal government, yesterday, disclosed that many states were in serious financial mess by the time President Muhammadu Buhari assumed office on May 29, 2015. It also said several states were now afloat because of the financial reliefs the Buhari administration had provided for them.

Minister of Information and Culture, Alhaji Lai Mohammed, made the assertions while addressing newsmen at the end of the weekly virtual Federal Executive Council (FEC) meeting, chaired by Buhari at the State House, Abuja. Mohammed said although some states, especially those governed by the opposition Peoples Democratic Party (PDP), had in recent times claimed they were not gaining from the Buhari administration, most states were being sustained with bailouts and lifelines from the federal government.

Yemi-Esan further disclosed, via a circular dated June 21, 2022, which was sighted by THISDAY last night, that the process of appointing a substantive Accountant General of the Federation had commenced. She said the president had ratified the process.

Mohammed stated that no fewer than 24 states, across party lines, had demanded and received refunds from the federal government for works done on federal roads and bridges, adding that records show that the refunds total about N477 billion.

“Like I said, apart from these refunds that were made, I said earlier on that when we came in, 27 states could not pay salaries and the federal government had to bail those 27 states out. Not only did they give them money to pay salaries, they also gave them bailout to pay arrears.”

The minister clarified that refunds were different, saying repayments are made for jobs done on behalf of the federal government.

He stressed, “I have here phase one of 24 states that were refunded for what they did on behalf of the federal government, even before we came in.

“These claims were not based on what they did on our behalf, but what they did in previous administrations. Number two, I have said that when we came in, 27 states could not pay salaries, so we bailed them out to be able to pay salaries and pay their arrears.

“Now, in addition, we found out also that the states were in difficulties and they could not start any work, in terms of infrastructure, and the federal government gave each of them N10 billion.

“When the price of oil, again, collapsed and states were in trouble, the federal government gave out a bailout of a billion naira per month to each state for eight months and N800 million per month, per state, for over eight months and the records are there.”

Mohammed said when the states complained that they did not benefit from the Paris debt refund, the federal government gave the states their own share of Paris Fund.

“And I know that Jigawa State, in particular, received N40 billion of this Paris Club Refund,” he stated.

The information minister added, “Next time I come, I’ll give you what every state received in terms of Paris Club.

Elaborating on refunds to states for works done on federal roads and bridges, the minister stated, “I think it’s important to say that, well it’s true that we’re just reporting this particular memo, which is the refund being sought by Yobe State Government; Yobe State Government is asking for the sum of N18, 663,843,109 as reimbursement for five federal roads, which they rehabilitated or constructed.

“A committee as was set up to inspect the claim, they were actually found to be true. They reviewed the N20 billion they asked for and certified N18 billion as refund due to Yobe State for undertaking the construction/rehabilitation of these federal roads on behalf of the federal government.

“But this is not the first time, we have, since 2015, made refunds to about 24 states, if my records are correct, and I want to put on record here that but for the benevolence of this administration, many states would have sunk under.

“You will remember that by the time we came in, about 27 states of the federation were unable to pay salaries, they owed salaries and could not pay, it took this federal government to really bail many of them out so they could pay not only salaries, but also they could pay the arrears.

“When the price of crude crashed, this same government gave each state what is called a bailout and some of the states today that complain that they’ve never benefited from the federal government, especially the PDP states, are the ones that have taken the lion’s share of this reimbursement.

“The records I have here say that Akwa Ibom got to the tune of N61 billion from this federal government for works they did on behalf of the federal government and, especially, before we came in. Rivers had upwards of N100 billion. It does not matter whether you are PDP or APC or you’re Labour or you’re APGA, this administration looks at you as a Nigerian and when largesse are being distributed, it does not favour you just because you are from APC state or from a friendly state.

“Second tranche and the last tranche, I think it’s Yobe and two other states that are supposed to be the next batch.

“We have Yobe, which has gotten its N18 billion today for works that they undertook on behalf of the federal government.”