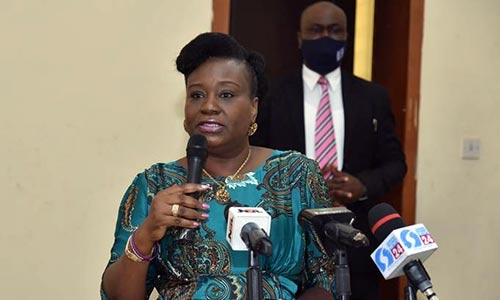 Head of Service of the Federation, Yemi-Esan, disclosed that 6,000 workers without employment letters were discovered in the Federal Ministry of Information and Culture and Federal Ministry of Labour and Employment during the cleaning up of the IPPIS. She made the revelation yesterday in Abuja, while briefing the media as part of the activities marking the 2022 Civil Service Week.

Yemi-Esan said 5,000 of the ghost workers were detected in one MDA at the Federal Ministry of Information and Culture.

She also said the Director of Human Resources at the Federal Ministry of Labour and Employment was handed over to the Independent Corrupt Practices and Other Related Offences Commission (ICPC) after 1,000 fake workers were uncovered at the ministry.

According to the head of service, “In one MDA we got over 5,000 fake employment letters at the Ministry of Information alone and we had to suspend all of them. And when we got to Labour, we discovered over a 1,000. At that time, we said we would not just lay off, we let the ICPC hold the Director of Human Resources at that time as all the employments were fake.

“We are trying a lot, unfortunately, it is the people trying to beat the system that go out to bad mouth the Office of the Head of Service.”

She stated that following sustained efforts to clean the system, the payroll had currently come down to 74,000 workers from the bloated over 100,000 workers that were earning salaries illegally.

Yemi-Esan said many of the fake workers were detected from the payroll through the human components of the IPPIS, which was started few years ago and designed to verify important credentials, including letters of appointment, academic certificates, the age declaration at entry, and birth certificates.

She added that the Civil Service Commission, which was still in the process of verifying letters of employment from 2010 to date, two months ago sent her 3,000 names of fake workers to suspend from the IPPIS for possessing fake employment letters.

Her revelation was also corroborated by Permanent Secretary, General Services Office, Office of the Secretary to the Government of the Federation (OSGF), Dr. Maurice Mbaeri. Mbaeri said five fake workers were laid off at the OSGF on Tuesday after a screening exercise discovered they were neither validly employed through the Civil Service Commission nor could their files be found at the commission after further investigation.

Yemi-Esan announced in a circular dated June 21, 2022 that the process of appointing a substantive Accountant General of the Federation had been ratified by President Muhammdu Buhari.

The former Accountant General of the Federation, Ahmed Idris, was suspended following his arrest by the Economic and Financial Crimes Commission (EFCC) over an alleged N80 billion fraud.

According to the circular, referenced OHCSF/PS/CMO/193/03, addressed to the Chief of Staff to the President, all serving ministers, Secretary to the Government of the Federation, Governor of the Central Bank of Nigeria (CBN), Chairman EFCC, and National Security Adviser, among others, all accountants in the mainstream of the Federal Civil Service in the pool of the Accountant General of the Federation, who have attained the position of substantive Director on Salary Grade Level 17 on or before January 1, 2020 and not retiring from the service earlier than December 31, 2024 were eligible to participate in the exercise.

She requested that all the documents must reach the office of the Permanent Secretary, Career Management Office (CMO), Office of the Head of Service of the Federation, on or before 4 p.m. on July 6, 2022.