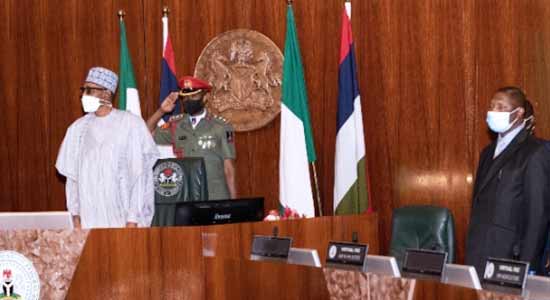 The Federal Executive Council (FEC) has approved N52,203,698535 for contracts, including variations, across ministries, as well as a project expenditure refund to Yobe State.

Details of the approvals were disclosed to State House Correspondents after the week’s virtual FEC meeting, which was presided over by President Muhammadu Buhari at the Presidential Villa, Abuja.

Speaking at a briefing after the meeting, Minister of Information and Culture Lai Mohammed said the Ministry of Works and Housing received approvals for two memoranda, one being a revised cost for the construction of the Yola-Hong-Mubi Road, which was put at N29,826,449,000; and the approval for a refund of N18,663,843,109 to Yobe State for works done on federal roads and bridges.

“The Honourable Minister of Works and Housing also wrote two memos, the two of them were also approved. The first is the memo by the Minister seeking Council’s approval for the revised estimated total cost of the award of contract for the rehabilitation of the Yola-Hong-Mubi Road in Adamawa State, for the sum of N29,826,449,000 billion, thereby revising the initial contract from the original N21,841,578,000 to N51,668,027,000.

“The contract was awarded to Messrs. EC Construction Limited and it has an additional 24 months for completion. Of course, the once again the revised estimate to come in because of the paucity of funds to execute the original contract when it was awarded. And from that, because of the poetry of phones contracts we could not have continue. This one of the contracts that is going to be financed by this book burned the

The Minister also disclosed that Council approved N1,113,406,426 for the revised estimation of a power project for the Gwarimpa axis of the FCT, adding that it was initially awarded in 2015 at the cost of N527 million.

“They came back in 2018 and they’re coming back today to say that given the population of Gwarimpa, they need not two, but actually three MVA injection substations, and that contract was approved today for the sum of N1,640,406,426.26, revising the contract sum by about N1,113,406,426. Originally it was at N527 million,” he said.

The Minister of Industry, Trade and Investment, Otunba Niyi Adebayo, said he got approvals for the two memoranda he presented to Council, including the repeal of the Produce Enforcement of Standards Act of 2004 for the approval of the enactment of the Federal Produce Inspection Service Bill 2022.

The second memorandum, according to him, was for Council to “approve the award of contract for consultancy services for the pr- development of the Funtua Integrated Textile and Garment Park, in Katsina State and for the Medical Tourism Park in Lekki Special Economic Zone in Lagos State in the total sum of about N1.4 billion to Messrs Tata Consulting Engineers in partnership with Messrs Abi Grant Limited”.

The Minister of Labour abd Productivity Chris Ngige said he also presented two memoranda, including one presented on behalf of the Nigerian Social Insurance Trust Fund (NSITF), which is aimed at digitizing the parastatal and creating the eNSITF platform to combat the menace of fraudulent practices in the system.

“The second memo has to do with employment, job creation. It’s a portal called Nigerian Labour Exchange (NILEX), it’s housed in my ministry but over time, because it’s not been developed, the portal is so small it cannot take stress of the number of people wanting to go into that, that digital platform is supposed to be used by employers on one hand and job seekers.

“The employers will come in and load the vacancy they have, the type of skill they want, the qualifications of people that can fit in there,” he said.