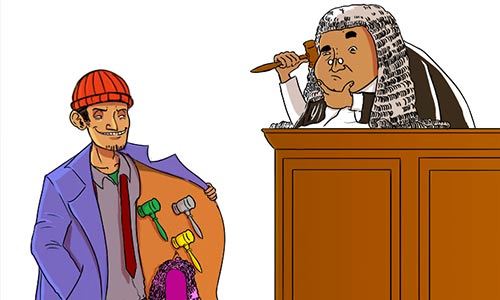 The Judiciary has been said to be the last hope of the Common man. As an umpire in the arena of governance, it is expected to maintain a reasonable level of independence, in that, nobody should be able to influence it. As the arm which interprets the law, it checkmates the actions of other arms of government to ensure that such actions are performed within the prescribed boundaries of the law. This is in furtherance to the principle of the rule of law. The Judiciary as an arm of Government needs the corporation of the executive and the legislative arm of government, so that there will be a smooth ride on the wheels of governance. However, where any of the arms fails to give the expected support, by disobeying court order, the arena of governance will only invite chaos to the fore. The Nigerian Democracy has several times suffered disrespect to the judicial arm. Most worrisome is the fact that heads of the executive arm have been notorious for such unrighteous act. While they perhaps show such scorn for their individual aim, little do they know that there is a far-reaching consequence (s) that follows which the society will take no-aeon to recover from. This piece will be looking at these consequences if any when an order of court is treated with scorn by the executive arm of government.

MEANING OF CONTEMPT OF COURT:

Disobedience of a court order simply amounts to Court Contempt. Chidi Nworka, in his work titled, “Putting The Law And Practice Of Contempt Of Court In Proper Perspective”, cited the case of Atake v. A.G. Federation 1982 11 S-C 153 @ 175 – 176, wherein contempt of court was defined from the causative angle as any conduct which tends to bring into disrespect, scorn or disrepute the authority and administration of the law or which tends to interfere with and/or prejudice litigants and/or their witnesses in the course of litigation. It has also been defined in the case of A.G. v. Magazine Ltd (1979) AC 440, per Lord Diplock as “an interference with the due administration of justice either in a particular case or more generally as a continuing process”.

Contempt could be criminal or civil. Criminal contempt basically deals with those actions that directly affect the administration of justice. It involves actions that tend to prejudice a fair trial, or even interrupt the proceedings of the court. Statements when made that also scandalize the court of law, or a judge amount to criminal contempt. Civil contempt on the other hand involves the willful disobedience of court order which is the type of contempt this piece is focusing on; disobedience to the order of the court by the Governor or “the Executive”, in quote.

In the case of Ejembi v. A.G. Benue State (2003) 16 NWLR (Pt 846) 337 C.A., the court stated that the essence of contempt is action or inaction amounting to an interference with, or obstruction to, or having a tendency to interfere with, or obstruct due administration of justice. (P. 356, Paras. G-H).

The foregoing suggests that whether done in the face of the court (in facie curiae) of outside the court, (ex facie curiae), the moment an act is intended to alter the aim of justice, the same amounts to contempt. Hence, the act of a person disobeying court order is nothing other than a direct interference with the administration of justice, whether done by one in government or not.

DISOBEDIENCE OF COURT ORDER BY A GOVERNOR, THE CONSEQUENCE (s)

A Governor is the head of the executive arm of Government at the state level, just as the President heads the Executive arm at the National level or the Federation as a whole. As one charged with the responsibility of implementing the law, it is the maximum expectation that he or she does everything in his or her capacity as provided by the law to see that the law is executed. This is also the case when an order of court is made against the executive arm of Government.

Recent events, however, show that the Executive have been found wanting with respect to obeying court orders. The Kano State Governor, Ganduje was ordered by the High Court not to install the newly appointed Emirs or simply put, the creation of four new Emirates pending the determination of a motion on notice filed before it. The Kano State Governor contrary to the order of the Court, issued appointment letters to the Emirs and installed them. When commenting on the development, he informed the press that he wasn’t aware of such orders of the Court.

Although, those involved or indicted have tried justifying the reasons for the actions they took, contrary to the pronouncements of the court, little do they know that their actions have some consequences that naturally follow. In the case of Ibrahim v. Emein (1996) 2 NWLR (Pt 430) 322 CA, the court stated that where a valid court order is unjustifiably violated, the person who violates it may face any or all of the following consequences viz:

The first consequence noted by the court is to the effect that where a person is said to have committed contempt or disobeyed court order, the same will be tried for contempt. Although, the governor or the president when suspected to be found wanting may not be brought before the court instantaneously because of immunity, fact remains that the same could be tried after leaving office. Apart from these general consequences, there is an impact contempt perfected by the Executive has on the society. This is that, the society may most likely tilt towards a chaotic state.

For instance, in the Ibrahim’s case earlier cited, the then Military Administrator of Niger State, Col. Emein abused an order of the court in collaboration with the Attorney General of the Federation.  Describing the pathetic nature of such act, the court held as follows:

“..It is indeed a sorry situation that such highly placed Government functionaries should descend so low to disobey a clear order of this Court with reckless abandon. They are supposed to set good example for the people to follow, but instead they tenaciously promoted indiscipline of the highest order by openly promoting lawlessness in our nation from vantage point of their seal of power. It is indeed very regrettable to place such type of people in a position of authority.”

“I am of the firm view that for a nation such as ours, to have stability and respect for democracy, obviously rule of law must be allowed to follow its normal course unencumbered. If for any reason, the Executive arm of government refuses to comply with court orders, I am afraid that arm is promoting anarchy and executive indiscipline capable of wrecking the organic framework of the society. The Corporate existence of Nigeria, it must be admitted postulates the principle of co-operation between the three arms of government (Executive, Legislature, and Judiciary), where these work together in the same framework, then the rule of law shall prevail in that society. But where each selects to work in isolation and or in utter disdain of the other, then havoc wrecks the society.”

The above-mentioned statements of the court summarize the attitude of the court over disobedience of court order by the Executive. One thing peculiar about the Ibrahim’s case is the court’s reproach to the then Attorney General, who failed on his own part to advice the Military Administrator about the implication of such disobedience. To show the court’s displeasure with the disappointing attitude of the Chief Law Officer, the court recommended disciplinary actions against him. It is that serious. The court does not treat such disrepute with kid glove especially when it is coming from those who ought to live by example such as the Executive arm.

The court in the case of COP v. Omanukwue (1999) 12 NWLR (Pt 590) 190 CA stated that the rules embodied in the law of contempt of court are intended to uphold and ensure the effective administration of justice. They are the means by which the law vindicates the public interest in due administration of justice. The Law does not exist to protect the personal dignity of the judiciary nor does it exist to protect the private rights of parties or litigants (Mobil Oil Nig Ltd v. Assan (1995) 8 NWLR (Pt. 412) 129 at 131 — Page 201, Paras E-H).

Not only so, the Law relating to contempt of court is designed to sustain the institution and keep it inviolate. It is not designed for a show of raw power of Judge. It is not to boost his ego or advance his personal aggrandizement. (See Okeke v. Nwokoye (1999) 13NWLR (Pt 635) 495 CA (P. 511, Para C).

A Person against whom an order has been made by a court of Competent jurisdiction has an unqualified duty to obey that order until the order is discharge. It is not for the person against whom the order is made to say that the order is null and void or whether it is regular or irregular. It is another court to so declare (F.A.T.B. Ltd v. Ezeagbu (1992) 9 NWLR (Pt. 264) 132 [referred to] (P. 200. Paras C-G. (COP v. Omanukwue, cited above)

The aforementioned statements of the court points to the fact that orders of court are to be obeyed to the letter. It is a thing of shame for another arm of government to disobey an order of court. It doesn’t tell well on the justice system and justice delivery. The danger is that where this is condoned, the ordinary citizens will have reasons reference for their own act of violation. It is a virus that must be eliminated; it is a sickness that must be cured.