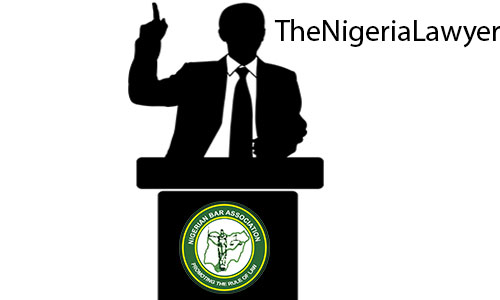 The past secretary of the Nigerian Bar Association, NBA, Dutse Branch, Mr. M. M. Kashim, has reacted to the publication credited to one Sani Amani regarding the decision of the NBA National Executive Committee recognizing Nuhu Suleiman Tafida and members of his executive committee as the duly elected leadership of the Dutse Branch, Jigawa State

The fact-finding committee led by the NBA’s 1st vice-president, PJohn Aikpokpo-Martins, had found that the Garba Abubakar-led factional executive committee of the branch was unlawfully constituted and in contravention of the provisions of the NBA constitution and the articles of the uniform bye-law for branches. The decision of the NBA NEC above was based on the recommendations of the Committee.

However, in reaction, Abubakar said the decision of the NBA NEC is ultra vires because there is a suit on the matter already pending before the High Court No. 3, Jigawa. He described also the situation as an attack on Nigerians by a section of the country who see themselves as demi gods.

On his part, Ammani accused the NBA President, Olumide Akpata, of deepening the crisis of the Branch for taking such a decision. According to Ammani, the NBA President breached fair hearing of the Attorney-General of Jigawa state by not waiting for him before commencing the hearing

Against this background, Mr. Kashim faulted Ammani and defended the decision of the NBA NEC. According to him, Ammani’s submission that the petition was written during the tenure of Paul Usoro, SAN, after elections is a fallacy. So also the claim of breach of fair hearing.

Kashim said, “Our attention has been drawn to some mischievous and misleading article written by one Sani Ammani which targeted at tarnishing the good image of the President of the Nigerian Bar Association whose kind intervention brought to an end to long drawn and unfortunate balkanisattion of NBA Dutse.

“For the records, The fallacy that the petition written during the Era of Paul Usoro SAN was after an “election” of a certain Garba Abubakar Esq is an outright fallacy. So also the claim of lack of fair hearing to the side of the embattled impostor.As the both the Election Petition Committee Northern Branches led by Miannaya Essien SAN and the General Secretary of the NBA then, both contacted the disbanded Election committee Chairman.BBut in their usual characteristics and antics, they claimed not to see any such mails.

“The author of the article alluded to the fact that Nuhu Tafida was not elected as Chairman of the branch. That is blatant lie. As a matter of fact, practical pictorial evidence of the election of Nuhu Sulaiman Tafida will be supplied buttress a point on that. Including the Ballot paper used. I however challenge Mr. Ammani and his cohorts to post a sample of the marked ballot paper used and a picture of a single member casting his vote to the person Mr. Ammani claimed was elected.(I will gladly wait for 12 calendar months) for the sample of the ballot paper.

“It’s also worthwhile to stress that it is not true that the Fact Finding Committe failed to wait for the Hon. Attorney General of Jigawa State before they commenced hearing. The Committee tried all they could under the sun to see that they carried every body along, but the HAG’s team failed and or neglected to cooperate with them in their bid see that justice and fairness thrives.(Read the Committee’s report) Submitted to NEC. Assuming but not conceding that the HAG was unavailable as claimed, there were among his side two former AGs one of whom is an SAN,amongst other members who would have present the Garba’s side of the story to the committee, but instead choose to blackmail the President vide whatsapp message sent to the Chairman of the Fact Finding team(See the committee’s report) just for them to cry blue murder! ”

Kashim also addressed the issue of Form 48 which has gone viral in the media. He said the form was published at the point of filing so as to achieve sinister motive as the form was not endorsed by the judge.

“Ditto the fabricated news of Court ordering the NBA President to purge himself of contempt.The copy of the ‘Form 48’that was mischievously circulated was taken at the point of filing to make it viral so as to achieve some sinister motives against the person of the President. The said’ Form 48′ was never endorsed by the Judge who called the party claiming Contempt to come forth and address him on the order allegedly flouted (if any) They dissappeared till date, without addressing my lord! This is the registrar’s number :08022868198.Mr.Ammani can verify.

“As for The Fact Finding team taking decisions during the pendency of a suit, I want to place on record that the idea of sending a 5-Man Fact Finding committee to Dutse is not the unilateral decision of the President. As a matter of fact both sides of the divide consented to the Setting up of the 5-Man committee knowing full well that the case is still pending. For avoidance of doubt this is what Garba said on the Setting up of the 5-Man committee by President :

“We hope that with this intervention, probably, the Branch is going to get what is desired for the branch. NBA Dutse is one branch, there’s no other branch apart from the branch we have…”(You will see him talking in a video) which is attached.
Equally too, The same Person claiming ‘Sub-judice’ drafted the reverred Prof. Muhd Tabiu SAN to also intervene in the matter in February, 2021 despite having filed his suit since 16th September, 2020. As matter of fact he attended the parley at the learned silk’s residence for uncountable times, perhaps forgetting his favorite and darling cliché ‘SUBJUDICE’.

“For avoidance of doubt, The candidate of Mr. Ammani NEVER went through any election process whatsoever. (We are waiting for a contrary view anyways) What happened was that even as the purported election committee (which was set up by the Past Chairman, Bashir Usaini in the comfort of his room and thrown same to members of the branch via whatsapp) Which Mr Ammani referred to has set for themselves an election guidelines, they never waited for the June, 23,2020 which they set as the election date.They merely proclaim Ammani ‘s candidate winner ‘ unopposed’ on 19th June, 2020 upon realizing that the then President Paul has set up a CTC for the branch. That is what Ammani called elections!

“The poser is that by the NBA branch bye laws can an election Committee be set up unilaterally other than by the means prescribed by the Bye law? That was what we challenged ab initio and accordingly upheld by the Then President Paul. In the same vein Baffa Alasan emerged as Caretaker Committee Chairman by virtue of being a Past Chairman of the Branch.”