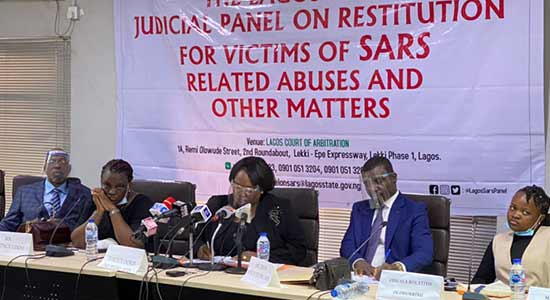 …Policemen drove over my leg, broke my ankle – Housewife

There were shocking revelations at the Lagos State Judicial Panel of Inquiry and Restitution for Victims of SARS and Related Abuses on Saturday.

A deacon with the Apostolic Church, David Komolafe, told the panel how he lost a tooth and fiancée to police brutality while a housewife revealed how the minions of law drove a vehicle over her leg and broke her ankle.

Deacon Komolafe told the Justice Doris Okuwobi-led panel of inquiry that his ugly encounter with the police occurred in 2010 as a police officer bullied and beat him to a pulp over an issue he described as trivial.

He said he was going to church around 5 am on December 30, 2010 and had boarded a Coaster bus at the bus stop.

He upon getting into the bus, he politely asked a police officer to shift so he could sit beside him. But to his surprise, the officer took offence and became hostile to him.

Deacon Komolafe said he politely asked the second time that the officer should let him sit beside him, but he was again rebuffed by him.

He said: “Before I could hold my peace, the policeman had pounced on me. The bus driver had to stop the vehicle due to the commotion while other passengers tried to stop the police officer and rescue me all to no avail.