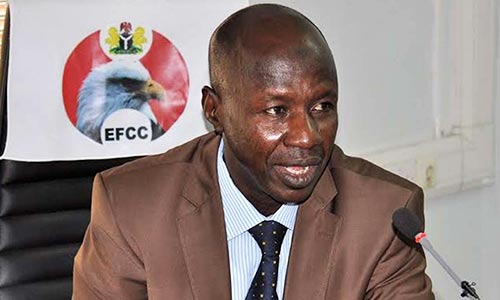 AHEAD of the resumption of probe next week of the suspended Acting Chairman of the Economic and Financial Crimes Commission (EFCC), Mr. Ibrahim Magu, his counsel, Mr. Wahab Shittu, is under ethics pressure, it was learnt on Thursday.

A group, under the aegis of the League of Abuja Young Lawyers (LAYL), has urged the Presidential Investigation Committee, led by Justice Ayo Isa Salami, to impose sanctions on Shittu for alleged conflict of interests.

It said Shittu cannot be a counsel to Magu and EFCC at the same time. But Shittu said he has not breached any code of ethics, explaining that his defence of Magu does not amount to conflict of interest because he is not an employee of the anti-graft agency.

The group’s President Nwoko Clems alleged that Shittu, as a prosecutor to EFCC, can no longer represent Magu before Salami panel.

He said: “The panel should immediately ex- communicate Shittu as result of conflict of interest in the ongoing probe.”

But in a statement on Thursday, Shittu said: “This issue arose in the proceedings of Hon. Justice Salami’s panel and was argued and resolved. I have always appeared as counsel to EFCC in several proceedings.

“I have five landmark judgements obtained in favour of Magu and EFCC in which I appeared as counsel to both in the referred proceedings.

“Secondly, I have represented Magu in several libel matters as his counsel of choice.

“Thirdly, as a private counsel, I’m not retained by EFCC but the external counsel to EFCC, based on cases assigned to me by the commission.”

“Significantly, Magu has not been removed as EFCC chair; he is only suspended. There is no breach of ethics in representing Magu, who is only suspended but not removed, especially in the context that he remained the acting chair of EFCC at the time I took the brief.

“Lastly, Magu is not on trial by the EFCC but by the Salami panel, which is embarking on a fact- finding. I am not a salaried employee of the EFCC but a private counsel.

“For these and several other reasons, I submit that there is no conflict of interests whatsoever. I rest my case.”