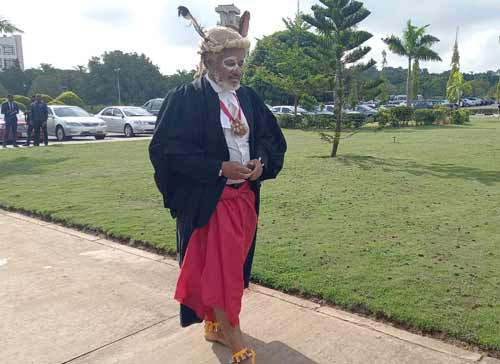 Lagos based Human right Activist and Lawyer, Malcolm Omirhobo, who is currently trending on social media for going to the Supreme Court in a traditional attire identified with “olokun” worship, has shed light on the reason for his action which is eliciting reactions from members of the public and the legal profession alike.

In an interview with PUNCH Malcolm speaking on what informed his decision stated that while he was been satirical by his action, it was nonetheless done in compliance with the import of the recent judgement of the Supreme Court permitting Muslim students of Lagos public schools to put on Hijab in exercise of their Freedom of Worship.

He said: It is in response to the Supreme Court judgment of Friday (last week) against the Lagos State Government that female Muslim pupils can now wear hijabs to school. I am being satirical; I am trying to comply with that judgment. By that judgment, they are saying that wearing a hijab is a mode of worship by female Muslim pupils and any attempt to deprive them of that will amount to the violation of their fundamental human right, freedom of thought, conscience and religion, and stopping or harassing them will amount to a violation of their right to dignity of their persons. It is not just an Islamic or private school; it is a public school. Nigeria is a multi-religious society. We have the traditional worshippers, Christians, Muslims, Rastafarians, Buddhists. The judgement implies that as long as we all have rights, we all can be allowed to go to our places of work or school in our religious attire.

He further noted that what he did was in exercise of his fundamental rights and in consonance with the Supreme Court’s judgement, and disputed the possibility of been legally challenged by anybody.

According to Malcolm, dressing to court in a traditional or religious attire is not contemptuous as it is not unconstitutional. He said: “I am not being disrespectful to the court. I am an African man. I am waiting to be told that I am not properly dressed. They should tell me what is proper dressing, according to the Constitution of Nigeria. Is there anything in the Legal Practitioners Act that defines the kind of dress I must wear? Whatever we wear is based on convention that we should wear black and white. Can convention supersede the constitution? The law says one (law graduate) will be called to the Bar, and wear a wig and gown. Did the law say I should not wear a feather on my head? Did it say I must wear black and white? The law didn’t say so. So, what we are wearing is just about culture, and culture does not supersede the constitution. So, that just shows there is a lacuna in our laws. They need to look at them critically. Nobody should tell me what is decent about dressing. I will continue to dress like this.  I am ready to face any panel anywhere and I go open book for dem.”

Speaking further, Malcolm blamed the Lawyers who represented the Lagos State government saying they must have done a poor job. He also accused the Supreme Court Justices of not been adventurous enough to reach the true position of the law.

“There could have also been an oversight. I believe the lawyers who represented the Lagos State Government didn’t put forward a good argument. You know the lackadaisical attitude of civil servants. The court probably did not consider the need for Section 10. The Lagos State Government did not do a good job and the court did not do a good job because it ought to have made its own input by saying that the right of society is greater than the right of an individual. Ordinarily, the court should be adventurous enough to go outside the box and take a stand on issues. The Supreme Court erred when it did not consider Section 10 and Section 38 together. Even if you look at Section 45 that says nobody’s rights should be toyed with except there is a law passed for the public interest, morality and security, that right can be derogated.”

In his conclusion, he expressed fears that the judgment will worsen the disunity in the country and fan the embers of inter religious intolerance.

“This judgment will worsen the disunity in the country. When you enter a public school in those days, you wouldn’t know who was a Christian or a Muslim and that is why what pupils wear in school is called a uniform. But imagine a teacher, maybe a fanatical Christian, coming into a class and seeing a pupil with a hijab; that could get the teacher annoyed and think she is a terrorist. If the teacher is a Muslim and the female pupil does not have a hijab on, the teacher could see that pupil as an infidel. That brings about disunity and hatred, suspicion and jealousy and unnecessary rivalry”