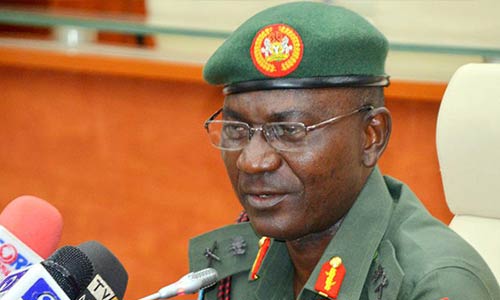 The Defence Headquarters(DHQ), has denied reports making the rounds that soldiers on internal security operations between the boundaries of Taraba and Benue States were playing tribal politics.

The DHQ, has also debunked allegations that the soldiers were taking sides by preventing the Tivs from returning to their ancestral homes.

Enenche, while noting that the Nigerian armed forces is a force that serves the interest of all Nigerians equally as guided by relevant laws, noted that the military is made up of professionals with adequate training on Internal Security issues and conflict management.

Enenche in a statement said, “The attention of the Nigerian Military has been drawn to news going round in some quarters and the media that the Troops operating at the boundary between Taraba and Benue States is taking side, by preventing the Tivs from returning to their homes. This unpatriotic comment from some individuals are coming after Troops of Operation Whirl Stroke and the Internal Security outfits of both Taraba and Benue States, have stabilised the security situation in the general area of confict between the two tribes.

“It is necessary to remind Nigerians that its Military is a force that serves the interest of all Nigerians equally as guided by relevant laws. Additionally, the Armed Forces of Nigeria is made up of professionals with adequate training on Internal Security issues and conflict management. Therefore, The high Command of the Nigerian Military debunks this fallacy of preventing the Tivs from returning home after the crisis.

“The general public is hereby assured of the total loyalty of the Armed Forces of Nigeria to constituted authorities as well as full commitment to the protection of lives and property of Nigerians”.