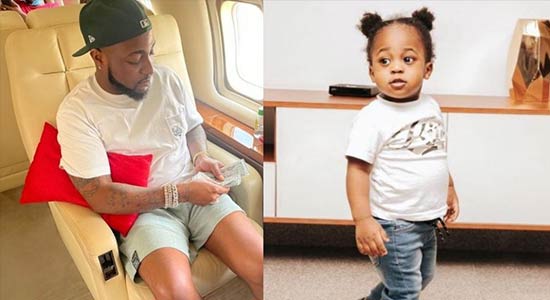 The CEO, Davido Music World took to social media to make this disclosure.

The father of three, who is currently in an estranged relationship with the mother of his son, Chioma referred to their son as heir apparent to the Adeleke dynasty.

30BG boss, who took to social media to leave Chioma a casual birthday message on her birthday on 30th, April, shared a picture of their son with the caption; “HEIR APPARENT” which he accompanied with an emoji of a crown.

Social media users have reacted to this outright declaration of the singer about his son.

Some have said it’s wrong to come out on social media to say such considering he has other children even though they are females.

Others have said he may possibly be doing this just so he can get Chioma back into his life.

Several others have compared the looks of baby Ifeanyi to his parents’ and sister, Hailey while praying for him and admiring his heritage.

clem_official wrote: “Nobody is telling @Davido the truth, the caption is wrong, you have other children, and they have mother’s too, don’t make the regret having a girl child for you, women can go any length, just don’t push them. Baba nor vex, just saying.”

amandachisom_ wrote: “So the girls are not good enough to be heir apparent even when they are older than him?”

officialyomexyb write: “Is it o my me that still believes @davido will eventually marry @chefchi if you have watched The EMPIRE you will understand what I’m saying.”

i_amfinabae wrote: “Lmao….Chioma will soon forgive him! He knows her mumu button!”

merciefoundation wrote: “Looks like your last daughter a lot.”