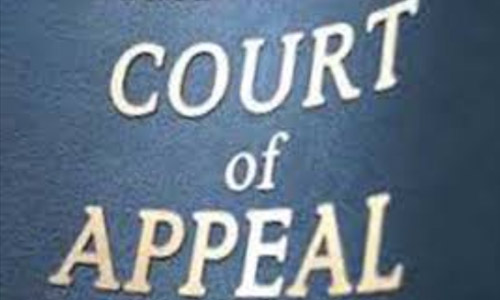 The Court of Appeal, Owerri division has affirmed the exclusive power of the Chief Judge of a High Court to make rules for trial practice and procedure.
On this premise, the Appellate Court upheld as legal, the Practice Direction enacted by the Abia State Chief Judge abolishing trial within trial, which was the subject of the appeal.

The appeal between Uchenna Muoneke v. The State, Appeal No: CA/OW/161C/2021, had the appellants appeal against the decision of the High Court of Justice, Aba Judicial division delivered on the 8th day of March, 2021 in Charge No: A/29C/2022 but substituted with A/84c/2020.

The facts of the case are as follows, the appellant and one other were charged for the offence of conspiracy, kidnapping and unlawful possession of offensive weapons and arraigned before the trial court. They pleaded not guilty to the charge, and on 2nd November, 2020, a fresh information with a 3 count charge was filed before the Court, and the appellant pleaded not guilty. The respondent called witness a police officer who sought to tender the confession statement of the appellant.

The learned counsel for the appellants sought to object to the admissibility on ground that it was not voluntary: as counsel was not present and there was no videotape in the cause of making a statement. He further argued that the Practice Direction of the Abia State CJ, which provided that evidence in trial within trial should be taken alongside substantive case and in the address if counsel, while ruling be taken at the time of judgment for the speedy dispensation of justice was unconstitutional abr contrary to the provisions of the Evidence Act, 2011. The respondent’s counsel countered that the said practice directions does not abolish trial within trial but rearranged it. Ruling on this, the trial court held that what was in question was the admissibility of the statement and not the legality or otherwise of the CJ’s Practice Direction. Thus, the Court admitted the confessional statement and reserved ruling on the probative value to the time of judgment.

The trial court in her ruling also refused to accept the invitation to state a case for the court of appeal aa raised by the appellant. Dissatisfied with the ruling of the lower court, the appellants pursuant to the Practice Direction of the Court of Appeal, filed an appeal, asking that the court determine whether the trial court erred in admitting the confessional statement, whether the Abia State’s CJ has power to enact a law on trial within trial.

2. Whether the trial Court erred to have admitted the confessional statement without determining if it was obtained in compliance with the ACJL Abia State, 2017, whether the trial Court was right to hold that the Abia State Practice Direction made by the CJ cannot be challenged in this suit but by a separate one made against the AG, and whether the trial court was right to refer the question of propriety enactment of the said Practice Direction to the Court of Appeal for determination.

Arguing their case, the appellant’s counsel, David Onyeika Esq on issue submitted that the trial court was in contravention of section 28 of the Evidence Act, and judicial precedent when it refused to hold a trial within trial. On issue 2, he argued that in lieu of the provision of the Constitution particularly section 4 which precluded a state functionary to veer into the domain of the National Assembly, the Abia State Cheif Judge was wrong to have made a Practice Direction in relation to matters of evidence which is dictated by the evidence act, and such the said Direction was null and void. On issue 3, the appellant counsel argued that the confessional statement was obliged to comply with the Section 27 (2) of the ACJL, Abia State and in the instant case it was not the case. On issue 4, the appellants argued that the court abdicated its judicial responsibility to rule on the objection that the Practice Direction is a necessary warrant for the Court to refuse conduct trial within trial. And on issue 5, the appellant submitted that once that it is trite law that once a part to the proceedings applies reference of question of propriety of an enactment to the Court of Appeal, the court shall refer the case as a matter of right.

Resolving the case, the Court on issue ruled that in the High Court there was what is referred to as the “JUDGES RULES”, which is a procedural mode if verifying the voluntaries or otherwise of a confessional statement. The court went to hold thus: “The Judges Rules and the conduct of trial within trial are just rules of practice and not laws, and the Court can make rules in practice Direction to regulate the conduct of trial within trial. Trial within trial is not backed by any law or statutory provision, nor rooted in the evidence Act.” Thus, the Court held that the lower court was not in error to have reserved its decision until judgement to decide the admissibility of the confessional statement, and resolved the issue against the appellant. Furthermore, on issue 2, the Court ruled that pursuant to s. 274 of the Constitution, the Chief Judge of a state is empowered to make rules for regulating the practice and procedure of the High Court of a State. Thus, the CJ of Abia State can make Practice Direction to regulate same. The issue was resolved against the plaintiff.

On issue 3, the Court held thus: “Failure to comply with the Provisions of the law does not affect admissibility of the statement.” The court went to hold that it was the Evidence Act that discerned the admissibility of the confessional statement and not state laws. Also, on issue four, the court ruled that the issue of legality or constitutionality of the Practice Direction was not an issue before the court and therefore, cannot be challenged now. Thus, issue 3 & 4 were resolved against the appellants.

The Court went to cite the case of Audu v. AG Fed & Anor. where rye Supreme Court held that court reserved the discretion to determine if there is a substantial issue of law to make reference to the Court of Appeal for determination. In the instant case, the court that non of the conditions where obtained and thus resolved the issue in favor of the respondent.

In lieu of this, the Court dismissed the appeal and upheld the ruling of the lower court.