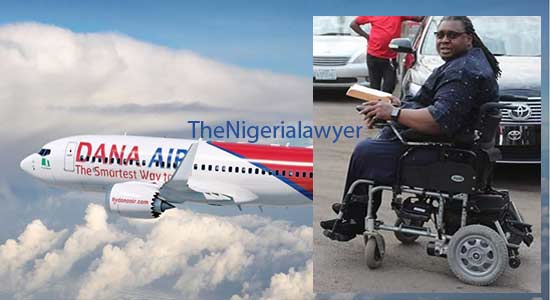 Dr. Chike Okogwu has been granted bail following his arraignment by the Police before the Area Court, Grade One in Gwagalada Abuja for allegedly causing public disturbance at Dana Air on Monday.

He was arraigned through a First Information Report (FIR/CR/61/2020) on Tuesday before the Court.

The FIR which was made available to TheNigeriaLawyer states that the nature of the offence is that he allegedly incited public disturbance, criminal trespass, and caused a mischief contrary to sections 114, 342, and 327 of the Penal Code Law.

It was alleged that he was ‘to fly Dana-Lagos on flight’ and that “after you collected your boarding pass, there was a delay on the said flight which lead to your annoyance and you started constituting nuisance at the hall, by inciting disturbance of public peace and you as well trespassed across Dana check-in counter and destroyed their computers, monitors, UPS and other valuables valued at the sum of #342,500 only”.

Meanwhile, upon taking his plea the Area Court admitted him to bail on the sum of #500,000 only and a surety who must be a resident within the jurisdiction of the Court.

Therefore, having perfected his bail, he has been released and the matter has been adjourned till 21st January, 2021 for continuation of trial.

However, in a video made available to TheNigeriaLawyer after he was granted bail, he reiterated that he was only trying to protect his right from being discriminated against over his disability which contravenes Discrimination Against Persons With Disabilities (Prohibition) Act, 2019.

In addition, the Association of Lawyers with Disabilities who is representing Dr. Chike through Kassim Olalekan Lawal, Esq. stated that the real issue has not been addressed based on the FIR that was filed.

In a statement his Lawyer made available to TheNigeriaLawyer, he said “it will be recalled that in January of 2019, the Discrimination Against Persons with Disabilities (Prohibition) Act, 2018 became an Act of the National Assembly following the assent of Mr. President.

“The law proscribes any form of discrimination whatsoever against persons facing social and institutional barriers in Nigeria. Two years on however, the Association of Lawyers with Disabilities in Nigeria (ALDIN) has witnessed flagrant disregard of the sacred provisions of the legislation. ALDIN has received several complaints from within the association and the general community of persons with disabilities continuous abuse of their rights despite the law. Dana Air in particular has been the frequent culprit.”

“Within the space of two weeks, the social media has been replete with agonizing stories of passengers with disabilities; they have told their stories of abuse of their rights with airline operators. There must be a stop to it”, he added.

TheNigeriaLawyer recalls that on Monday, Dana Air allegedly discriminated against Dr. Chike Okogwu by preventing him from boarding a scheduled flight because of his disability, noting that he can not board a flight with a wheelchair. This later got out of control because Dr. Chike was enraged and he was later taken away by the security operatives.

Conversely, Dana Air has denied discriminating against Dr. Chike Okogwu, whom they prevented from boarding a scheduled flight because of his disability on December 20.

Dana Air noted that it was a matter of policy, comfort and safety of their passengers.

In response to the entire situation, Dr. Chike was arraigned based on the above charges on Tuesday.