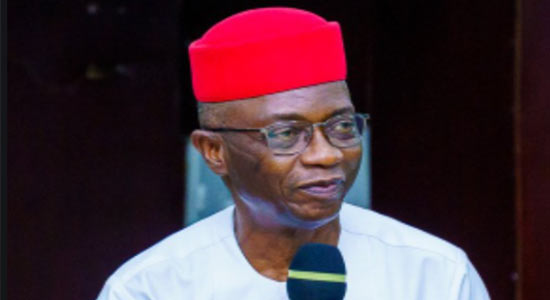 A Federal High Court in Abuja has dismissed a suit seeking to nullify the election of Hope Uzodinma and his Deputy Prof Placid Njoku and declare the governorship seat of Imo State vacant.

Justice Taiwo Taiwo held on Monday, July 19, that the applicant, Mcfyne C. Chikwedu, had no locus standi, adding that the suit was “patently non-justiciable.”

The judge noted that Uzodinma’s election had been affirmed by the Supreme Court and his court was not an election tribunal that could sit on appeal over elections conducted by the Independent National Electoral Commission (INEC).

He ordered Chikwedu to pay INEC N250,000 as costs “for bringing such a frivolous and meaningless suit to this court for adjudication.”

INEC and the Attorney-General of The Federation (AGF) were the first and second defendants, marked FHC/ABJ/CS/1085/2020.

The judgment followed Chikwedu’s suit alleging the Governor did not meet the constitutional requirement to be declared winner of the March 9 gubernatorial election of Imo State.

But dismissing his contention, the judge observed that there was no connection between the plaintiff and the defendants jointly or severally.

Taiwo held: “If I may ask, was he (Chikwedu) a contestant in the Imo Governorship Election in 2019? He only described himself in paragraphs 1 and 2 of the affidavit in support of the originating summons thus: ‘(1) That I am the plaintiff in this suit and an indigene of Ikeduru LGA of Imo State. (2) That by virtue of my position I am conversant with the facts of this case.’

“These averments are not enough to cloth the plaintiff with the toga of locus standi.

“It is a notorious fact that the issue of the Imo State governorship election has been litigated up to the Supreme Court; the Apex Court in the land on the 14th of January, 2020 and it was held among other things that Senator Hope Uzodinma is the winner of the Governorship Election of Imo State and that the Certificate of Returns be issued to him.

“This court cannot shut its eyes to these facts…This case has no legs to stand on. It is dead on arrival and nothing can be done to resuscitate it. I need to state that cases of this nature ought not to be permitted to see the light of day if not for the constitutional provision as to fair hearing.

“I am of the well-considered view that parties should desist from bringing such time-wasting suits to court knowing fully well that they have no chance to succeed. The time of the court is very precious.

“This case is dismissed in its entirety. This is the judgment of the court.”

The applicant had sought a declaration that Uzodinma’s election as Imo governor was unconstitutional and illegal for violating Section 1 and 179 of the 1999 Constitution.

He also sought, through his counsel F. I Aliuna, an order compelling INEC to withdraw Uzodinma’s Certificate of Return and conduct a fresh gubernatorial election in Imo State within 90 days from the date of the nullification.

Furthermore, he prayed for an order dissolving the Imo State Executive Council, Imo State Boards and Commissions, Imo State Local Government Interim Management Committee as constituted and all other appointments so far made by the Governor, and his Deputy and to direct them to immediately handover to the Speaker of the Imo State House of Assembly.

Lastly, he prayed the court to direct the Chief Judge of Imo State to swear in the Speaker of the Imo State House of Assembly as the Acting Governor with immediate effect pending the election and swearing-in of a substantive Governor.

INEC opposed him via his counsel, Anthony Onyeri, on the ground among others of a lack of locus standi, while the AGF did not enter an appearance.
Upholding INEC’s preliminary objection, the judge dismissed Chikwedu’s suit “in its entirety.”