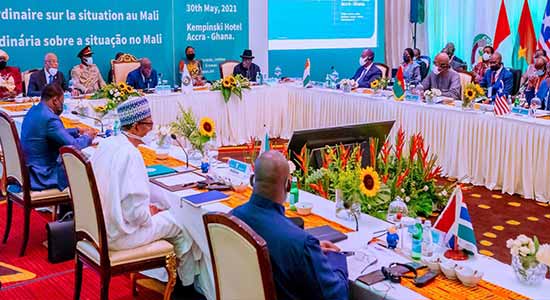 The additional sanctions included the recall for consultations by ECOWAS Member States of their Ambassadors accredited to Mali; closure of land and air borders between ECOWAS countries and Mali; suspension of all commercial and financial transactions between ECOWAS Member States and Mali, with the exception of food products, pharmaceutical products, medical supplies and equipment, including materials for the control of COVID-19, petroleum products and electricity.

Furthermore, ECOWAS announced its decision to freeze the assets of the Republic of Mali in sub-region’s Central Banks; freeze assets of the Malian State and the State Enterprises and Parastatals in commercial banks; suspension of Mali from all financial assistance and transactions with all financial institutions, particularly, ECOWAS Bank for Investment and Development (EBID) and Banque Ouest-Africaine de Développement (BOAD).

At the end of their extraordinary summit in Accra, Ghana, yesterday, the regional leaders also said the ECOWAS Military Standby Force would be readied for any eventuality.

The Accra meeting followed the decision of the Col. Assimi Goita-led interim government to abandon an original transition timetable, which had included elections next month after the military coup that toppled the government of elected President Ibrahim Boubacar Keita in August 2020.

Goita had led another coup in May 2021, which elicited sanctions and the suspension of Mali from ECOWAS.

The summit’s communique chaired by Ghana’s President Nana Akufo-Addo and Chair of ECOWAS Authority reiterated the bloc’s opposition to the presence of private military contractors, a reference to Russia’s support for Mali.

Malian authorities had accused France of abandonment for reducing its forces in the Sahel and Mali.
The French move forced the Bamako regime to approach Russia for support to deal with terrorists and Jihadist insurrections, especially in the northern and central regions.

There are indications that the new sanctions could hit hard on land-locked Mali, especially ordinary citizens who might find it difficult to withdraw money from the banks with the ECOWAS freeze of Malian assets and finances at the West African Central Bank based in Senegal.

While the sanctions could make life uncomfortable for the interim government, further destabilisation of Mali cannot be ruled out.

The communique stated: “The Heads of State and Government took note of the report of Dr. Goodluck JONATHAN, Former President of the Federal Republic of Nigeria and ECOWAS Mediator for Mali and the Memorandum on the political situation in Mali presented by Jean-Claude Kassi BROU, President of the ECOWAS Commission. The Authority commended the quality of the reports and the recommendations contained therein.

“The Authority, during deliberations, regrettably observed the failure of the transition authorities in Mali to take the necessary steps for the organisation of the Presidential elections before 27 February 2022 and contrary to the agreement reached with ECOWAS Authority on 15 September, 2020, and the commitment in the Transition Charter. The Authority deeply deplores the obvious and blatant lack of political will from the transition authorities that led to the absence of any tangible progress in the preparations for the elections, despite the willingness of ECOWAS and all regional and international partners to support Mali in this process.

“The Authority was briefed on the conclusions of the Assises National de la Refondation (ANR) of 13 December 2021, leading to the adoption of a calendar on the Transition in Mali. The calendar submitted on December 31, 2021 by the transition authorities to the Chairperson of the ECOWAS Authority of Heads of State and Government, schedules presidential elections to take place by the end December 2026.

“This will imply a transition period of six and a half (6.5) years. The Authority noted that important stakeholders did not participate in those ANR, thus reflecting a lack of consensus by national stakeholders with regards to the proposed calendar. Following the visit of the Mediator to Mali on 5 January 2022, the Transition Authorities submitted on 8 January 2022, a new calendar scheduling the conduct of the presidential elections for the end of December 2025, setting the duration of the transition for a total of five and a half years (5.5) years.”

Furthermore, it pointed out that the Authority found the proposed calendar for a transition totally unacceptable, stating that the calendar simply meant that an illegitimate military transition government would take the Malian people hostage during the next five years.

It, therefore, reiterated its call for the transition authorities to focus on activities geared towards an expeditious return to constitutional order and to defer key reforms within legitimate elected institutions to be established after the elections.

“In view of the above, the Authority decides to uphold the initial sanctions already imposed on Mali and on the transition authorities. The Authority also decides to impose additional economic and financial sanctions, in conformity with its deliberations at its Sixtieth Ordinary Session held on 12 December

2021 in Abuja, Federal Republic of Nigeria. These additional sanctions include: Recall for consultations by ECOWAS Member States of their Ambassadors accredited to Mali; closure of land and air borders between ECOWAS countries and Mali; suspension of all commercial and financial transactions between ECOWAS Member States and Mali, with the exception of food products, pharmaceutical products, medical supplies and equipment, including materials for the control of COVID-19, petroleum products and electricity.”

Other sanctions it listed included, “the freezing of assets of the Republic of Mali in ECOWAS Central Banks; freeze of assets of the Malian State and the State Enterprises and Parastatals in Commercial Banks; suspension of Mali from all financial assistance and transactions with all financial institutions, particularly, EBID and BOAD.

“The Authority instructs all Community institutions to take steps to implement these sanctions with immediate effect. The sanctions will be reviewed in view of a gradual lifting only after an acceptable and agreed calendar is finalised as well as monitored satisfactory progress is realised in the implementation of the calendar for the elections.

“These sanctions have been put in place to facilitate the process of a return to constitutional order in Mali which is necessary for peace, stability and growth. By excluding essential basic goods and services, the sanctions have been designed to avoid impact on the population. In addition, in view of the potentially destabilising impact on Mali and the region, as a result of this transition in Mali, the Authority decides to activate immediately the ECOWAS Standby Force, to enhance its preparedness, should the need arise.

ECOWAS also called on the African Union, the United Nations and other partners to support the process for the enforcement of the sanctions.

“Despite the denial by the Malian Transition Government, the Authority remains deeply concerned by consistent reports on deployment of private security agents in Mali with its potentially destabilising impact on the West Africa Region.

“The Authority notes that this situation is closely related to the stalled political transition in the country. The Authority strongly condemns the continued arrest and imprisonment of Malian Political personalities and former dignitaries by the Transition Authorities and demands that their cases be handled in line with the rule of law and respect of human rights.

“Concerning the Institutional Reforms of ECOWAS, the Authority instructs the President of the Commission to take all necessary measures for the new statutory appointees to take office on 1st July 2022 at the end of the tenure of the current management,” it added.