The accused person was arraigned on a four-count charge in case number MOZ/122C/19 of which he pleaded guilty to all the charges.

An assemblage of facts as contained in the certified true copy of the Judgment obtained by TheNigeriaLawyer, revealed that “between January 2017 and August 2019, (he) presented himself before the C.M.C Ozubulu and before the C.M.C Nnewi and before the Nnewi High Court on several occasions as a legal practitioner representing different individuals in different capacities, filed several processes and with the popular name O.V Nwosu, Esq collecting several professional fees as a Lawyer from innocent Nigerians”.

In addition, “he has no degree certificate and knowing he attempted the University and dropped (out) at 200 level and that he was never called to Bar.”

Pursuant to the above, the Nnewi Branch of NBA petitioned the Police and he was arrested. Upon a search warrant issued, lawyer’s wig and gown were recovered from his premises and accordingly tendered in Court.

However, the accused person pleaded guilty to all the charges and he raised the following plea of allocutus, as recorded by the Court:

“The defendant pleads for leniency because he committed the offence out of frustration because his mum was sick and nobody (was) to take care of her and he was the only son. He pleads with the Court to tamper justice with mercy as his wife is in labour room now and that he has two kids now and nobody to take care of them”.

Meanwhile, the Court noted that in passing sentence on him, it takes two things into consideration, “The fact that he told the Court the truth” and because “he is still a young man with wife and children and still has a future”.

Consequently, the Court held that “I will tamper justice with mercy and instead of sentencing the defendant to 3 years imprisonment which is the maximum punishment for the offence, the defendant is hereby sentenced to 1-year imprisonment or in the alternative for him to pay a fine of #80,000”.

TheNigeriaLawyer however gathered that the convict payed the sum of N80,000 and was let go.

Meanwhile, in a statement issued by a concerned Legal Practitioner which was sighted by TheNigeriaLawyer, he said the convict “joined practice and practiced with us for more than three years until he was fished out through the help of stamp and seal policy. He was charged to court and he pleaded guilty.

“Unfortunately, he was sentenced to one-year imprisonment or option of 80k fine. He fastly paid the fine and worked away. He left our jurisdiction since last year. This morning he posted this photograph on his what’s app status. This shows that he has not repented.

“Please we don’t know the jurisdiction he may have crossed over to continue with his illicit business. May we all be at alert in case we see somebody like him in our jurisdiction.”

All efforts to reach out to him via the phone number provided by our source has been unsuccessful as the said number has currently been unavailable since yesterday.

In a swift check made by TheNigeriaLawyer, it revealed that his display picture on WhatsApp shows he is in a car with black suit, white shirt and the Lawyer’s bib.

Further findings of TheNigeriaLawyer through his Facebook account showed that on June 7, 2020, he uploaded a profile picture of himself in full Lawyer’s robe, while on February 14, 2020, he added some photos where he is fully robed to celebrate his birthday. March 21, 2020, the same thing was done. 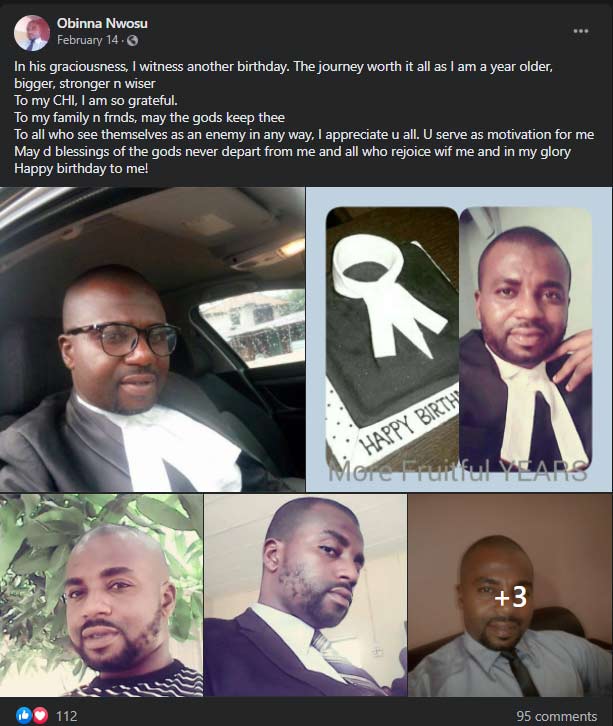