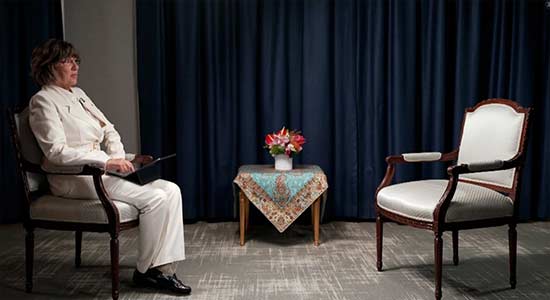 Iranian President Ebrahim Raisi canceled a New York interview with CNN broadcaster Christiane Amanpour at the last minute after she refused to wear a headscarf, Amanpour said Thursday, as women across Iran protest the country’s laws requiring women to wear hijab in public after a young woman died after being detained by Iran’s morality police.

The British-Iranian journalist was scheduled to interview Raisi Wednesday evening in New York, where the president traveled in order to address the United Nations, Amanpour said on Twitter Thursday.

The broadcaster took to her twitter handle @amanpour to announce the cancellation of the interview, on Thursday.

This came as women across Iran protested the country’s laws requiring women to wear hijab in public after a young woman died after being detained by Iran’s morality police.
Amanpour wrote on her Twitter handle: “Nearly an hour after the interview was slated to begin, Raisi had still not arrived,” she said adding “one of the president’s aides came forward and suggested Amanpour put on a headscarf for the on-camera interview because of Muharram and Safar, two holy months in Islam.”

Protests are sweeping Iran & women are burning their hijabs after the death last week of Mahsa Amini, following her arrest by the “morality police”. Human rights groups say at least 8 have been killed. Last night, I planned to ask President Raisi about all this and much more. 1/7

Amanpour said she “politely declined,” noting that previous Iranian presidents never required her to don a headscarf during interviews that took place outside Iran.

The aide gave Amanpour an ultimatum, saying it was “a matter of respect” and referred to “the situation in Iran,” Amanpour said, alluding to the protests in the country.

Amanpour said she could not agree to the condition and walked away from the interview, writing on Twitter it would have been “an important moment” for Raisi to speak as at least eight deaths had been reported amid the protests.

She further tweeted: “Protests are sweeping Iran & women are burning their hijabs after the death last week of Mahsa Amini, following her arrest by the “morality police”.

Human rights groups say at least eight had been killed. Last night, I planned to ask President Raisi about all this and much more.

“This was going to be President Raisi’s first ever interview on US soil, during his visit to NY for UNGA. After weeks of planning and eight hours of setting up translation equipment, lights and cameras, we were ready. But no sign of President Raisi.

“40 minutes after the interview had been due to start, an aide came over. The president, he said, was suggesting I wear a headscarf, because it’s the holy months of Muharram and Safar. I politely declined. We are in New York, where there is no law or tradition regarding headscarves. I pointed out that no previous Iranian president has required this when I have interviewed them outside Iran.

“The aide made it clear that the interview would not happen if I did not wear a headscarf. He said it was “a matter of respect,” and referred to “the situation in Iran” – alluding to the protests sweeping the country.

“Again, I said that I couldn’t agree to this unprecedented and unexpected condition. And so we walked away. The interview didn’t happen. As protests continue in Iran and people are being killed, it would have been an important moment to speak with President Raisi.”

Iranian news agency tweeted in @yashar: “The president of Iran demanded that @amanpour wear a headscarf to interview him and she declined.

“As Christiane points out, no other Iranian President has demanded this of her outside of Iran. Here she is with the last two Iranian presidents in New York. No headscarf.”