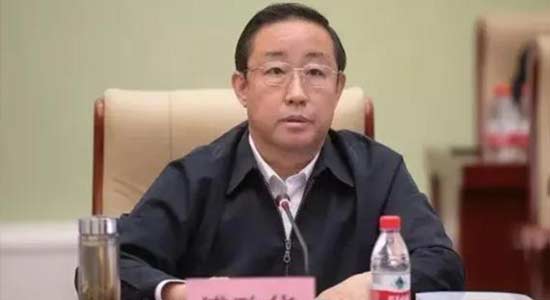 China’s ex-minister of justice Fu Zhenghua was sentenced to death with a two-year reprieve for taking bribes worth more than 117 million yuan ($16.5 million) and bending the law for personal gains, according to the Intermediate People’s Court of Changchun in Northeast China’s Jilin Province on Thursday.

Fu was deprived of his political rights for life, and all his personal property was confiscated. After the expiration of two years’ reprieve for his death sentence, his sentence will be commuted to life imprisonment, with no possibility of commutation or parole, according to the court ruling.

From 2005 to 2021, Fu took advantage of his positions, including the positions as head of the Beijing Municipal Public Security Bureau, vice minister of public security, minister of justice and deputy head of the Committee on Social and Legal Affairs of the National Committee of the Chinese People’s Political Consultative Conference, to provide convenience to some institutes and individuals in company operation, position adjustment and handling of cases, through which Fu took bribes worth more than 117 million yuan ($16.5 million) either directly or through relatives, said the court.

From 2014 to 2015, Fu concealed evidence involving suspected serious crime by his brother Fu Weihua, when he served as head of the Beijing Municipal Public Security Bureau. This concealment allowed Fu Weihua to avoid prosecution for a long time, according to the court.

The sum of bribes Fu had taken was huge, and he committed particularly serious crimes, which caused a heavy loss to the interests of the state and people and also had particularly bad social impact, said the court.

However, he received death with reprieve with consideration that Fu had confessed to all his crimes and pled guilty during the investigation, provided clues for important cases and had been cooperative in returning his illegal gains, according to the court.

Fu Zhenghua, 67, served as justice minister between March 2018 and April 2020 before assuming deputy head at the Committee on Social and Legal Affairs of the National Committee of the CPPCC.

Also on Thursday, Wang Like, former member of the Standing Committee of the CPC Jiangsu provincial committee and former head of the commission for political and legal affairs of the CPC Jiangsu provincial committee, was sentenced to death with a two-year reprieve for taking and offering bribes, sheltering and conniving with mafia-like organizations, and forging identity documents, according to the Intermediate People’s Court of Changchun.

Wang took advantage of his various positions to facilitate others in business operations, securing loans, job transfers, legal cases, and other matters. In return, he illegally accepted money and gifts worth 440 million yuan ($63.04 million).

Wang was also found to have offered bribes worth over 97.31 million yuan to other people, including former vice minister of public security Sun Lijun, among the criminal charges brought against Wang.

The court said after the two-year reprieve for his death sentence, Wang’s sentence could be commuted to life in prison in accordance with the law, but no further reduction or parole shall be granted.

Three other Chinese officials were also sentenced on Wednesday for taking bribes.