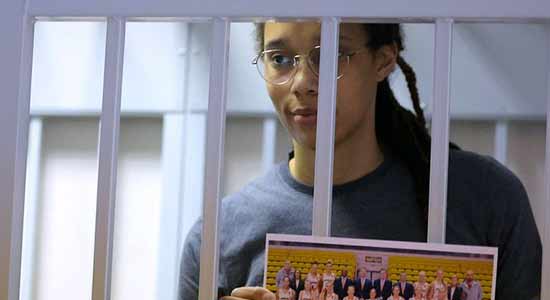 A Moscow court sentenced WNBA player Brittney Griner to 9 years in prison on drug charges, raising the stakes in deadlocked talks between Russia and the US on a possible prisoner exchange involving the basketball star.

“The court found the defendant guilty,” Judge Anna Sotnikov said, before announcing the jail term, according to the Interfax news service. Griner was also fined 1 million rubles ($16,300). Prosecutors had earlier asked the court to imprison her for 9 1/2 years, close to the maximum sentence of 10 years.

The sentence is “unacceptable,” US President Joe Biden said in a White House statement. “I call on Russia to release her immediately.”

Griner, 31, a two-time Olympic Gold medalist, had earlier apologized to the court. She pleaded guilty to smuggling last month, saying her action was unintentional, after she was arrested in February at a Moscow airport when customs officials said they found vape canisters containing cannabis oil in her luggage.

“We will certainly file an appeal,” said Maria Blagovolina, a partner at Rybalkin Gortsunyan Dyakin & Partners, which represented Griner at the trial. “The court completely ignored all the evidence of the defense and most importantly the guilty plea.”

Griner’s plight has generated widespread public support in the US, where the Biden administration has pledged to pursue “every avenue to bring Brittney home.” Secretary of State Antony Blinken said last week that the US had made a “substantial” offer to Russia for an exchange involving Griner and former US Marine Paul Whelan, who was jailed in 2020 on espionage charges that he denies.

The US is ready to swap them for Viktor Bout, an arms dealer known as the “merchant of death,” according to people with knowledge of the matter.

Bout, who was sentenced to 25 years in the US in 2012, has long been the subject of Kremlin efforts to return him to Russia. Even so, officials in Moscow have been leaning toward rejecting the prisoner swap because they regard its terms as unequal, people familiar with the Kremlin’s thinking say.

Russia would agree to swap Griner for Bout or a two-for-two exchange, a Russian official and a person close to the Kremlin said.

“There has to be a conviction for us to be able formally to conduct the swap,” Fyodor Lukyanov, head of the Council on Foreign and Defense Policy, which advises the Kremlin, said of the Griner trial. “The length of the sentence isn’t a factor in the exchange.”

A Russian official asked via a backchannel to include in any deal Vadim Krasikov, a former official with links to the domestic spy agency who was convicted of murder in 2021 in Germany, people familiar with the conversations said. Another potential target for Russia could be Vladislav Klyushin, a Kremlin insider extradited from Switzerland to the US in December on insider-trading charges, several people in Moscow with knowledge of the matter said.

The negotiations are complicated by the virtual collapse in relations between Russia and the US since President Vladimir Putin’s invasion of Ukraine in February. The US is backing Ukraine’s defense with supplies of billions of dollars in weapons and financial aid.

Despite the tensions, Biden sanctioned a surprise deal in April to exchange Konstantin Yaroshenko, a Russian pilot sentenced in 2011 to 20 years for conspiracy to smuggle cocaine, for Trevor Reed, a former U.S. Marine who was serving nine years in Russia after being convicted in 2020.