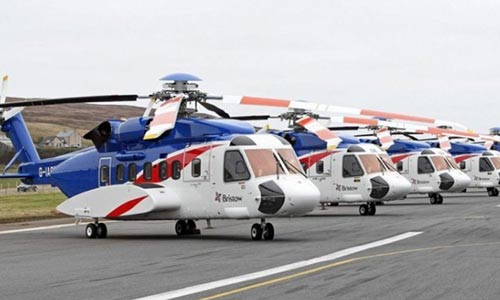 Following the face-off between the National Association of Aircraft Pilots and Engineers (NAAPE) and Bristow Helicopters over salary payment, the airline, on Tuesday, August 4, announced the sack of over 100 pilots and engineers (both nationals and expatriates) over the next couple of weeks.

The airline said it has engaged NAAPE to negotiate a fair and equitable redundancy compensation for the affected individuals. This decision is likely to be a fall out of the industrial action carried out by NAAPE which begun on Monday, August 3.

The airline said its decision is based on the impact of CCOVID-19 on the aviation industry, stating that its business has been affected adversely and would use the period to now restructure all aspects of its business model.

A statement from the airline reads: “The spread of the Covid-19 virus has severely impacted all sectors in the aviation industry including our market, which primarily serves the Nigerian oil and gas sector. In addition, the ongoing downturn in the global oil and gas market continues to influence and determine the demand for our services.

“The combined effects of these ‘arisings’ has resulted in very significant reductions to our business particularly a reduction in the number of contracted aircraft in Nigeria. As a result, the company must now restructure all aspects of its business model (both Rotary & Fixed Wing), including an extensive review of its operations and we continue to drive efficiencies, but with zero compromise to safety and our core values.

“One of these measures includes the right sizing of the business to ensure that the company has the optimal level of personnel to continue the safe delivery of its services to its clients, whilst allowing the appropriate capacity for future growth. Accordingly, and with much regret, the company has taken the very difficult decision to release over 100 pilots and engineers (both National and Expatriates) over the next couple of weeks.

“In compliance with the relevant labor and local content laws and also best practices; the company has engaged the leadership of the National Association of Aircraft Pilots and Engineers (NAAPE) to negotiate a fair and equitable redundancy compensation for the affected individuals.

“In compliance with the terms of employment, the affected individuals will be paid 3 months’ salary (excluding applicable deductions) following their exit from the company. The redundancy packages will be paid to them as soon as an agreement has been reached with NAAPE.

“This decision has not been made lightly, but having considered the state of the business and the very serious constraints caused by the spread of the Covid-19 disease and the downturn in the oil and gas market, the company must now take this painful, but decisive step to ensure the continuity of its business and delivery of essential services to its clients.”

The Nigeria Labour Congress (NLC) and its affiliate, NAAPE, had on Monday, August 3, grounded activities at Bristow Helicopters in Lagos, barricading all entrances into the company premises after breakdown of negotiations over payment of salaries.

NAAPE resolved to completely withdraw all services rendered to Bristow indefinitely over the renewal of pilots and engineers Condition of service (COS) and other issues after further break down of negotiations.

The association had on July 15, 2020 embarked on a three day warning strike at Bristow over the same issues but the action didn’t produce the expected response from the management.

NAAPE said some of the issues under contention are the management’s proposal to suspend the COS negotiations and their subversion of established terms of agreement with it.

Speaking on the infractions by the company, NAAPE Public Relations Officers, Frank Igwe described the picketing as a last resort saying the union has done all it could to bring their attention to the pains of their members but management remained adamant.

Mr. Igwe listed their demands including restart of the suspended CoS negotiations, fulfilling the promise of employing Nigerians as young cadet and trainee engineers, adjusting national engineers’ progression in tandem with expatriate nationals and global aviation standards among others.