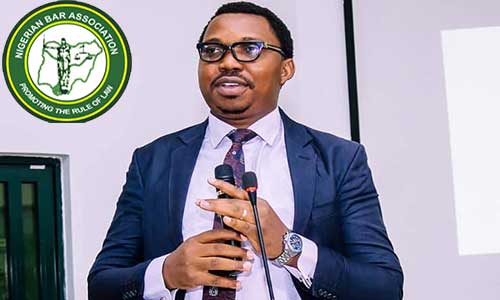 The Abuja branch of the Nigerian Bar Association has said that the recent investigation has revealed that the Ben who was named in the fraud syndicate allegation is not Benson Aigbojie as earlier opined.

This was made known in a statement signed by the Chairman of the branch, Folarin Aluko. According to him, both Benson Aigbojie and Maduabuchi were innocent.

Below read his press statement

Mr. Aigbojie became a person of interest following a statement made by his client to the Police and a reference in the Petition to one ‘Ben’. This also coincided with the identity of one ‘Ben’ mentioned in the Petition that was the source of the investigation.

Our inquiries show that the Ben mentioned in the Petition is one BENJAMIN and not BENSON. The investigation is being handled by Zone 2, Lagos and not the FCT Command.

Both Messrs. Aigbojie and Maduabuchi were assaulted following an altercation with persons believed to be from Zone 2. The DPO Kabusa Station was not in the office at the time the assault occurred. He cooperated with our enquiries and also apologized to Mr. Maduabuchi. It was Mr. Maduabuchi who drew the attention of the Bar to the incident.

Undoubtedly this unfortunate incident was escalated by the altercation at the station from which both Mr. Aigbojie and the officer involved sustained injuries.

I have spoken with Mr. Aigbojie and tracked his movement from Abuja. He is fine and safe, although he is en route to Lagos in custody of the NPF. In his words, “ I am being treated with respect”

I have also spoken with the Police Officer coordinating the investigation and he has been very professional, helpful and cooperative.

Mr. Clement Chukwuemeka of the NBA Bwari joined us at the station. He was in the know from the outset and has shown a keen interest to get to the bottom of the matter.

I urge our esteemed members to kindly disregard the earlier statement that purported to issue from the NBA Abuja Branch. It did not emanate from your Branch. Even a guilty person enjoys the constitutional presumption of innocence. Moreover violence towards suspects is not part of our jurisprudence- lawyer or not.

I have the assurances of the leadership of the Nigerian Police Force in the FCT that errant police officers who assault lawyers in the FCT will be disciplined.

I would also urge our members to accord the necessary respect to the men of the Nigeria Police Force. Any complaints should be channeled through the Branch to the appropriate authorities.