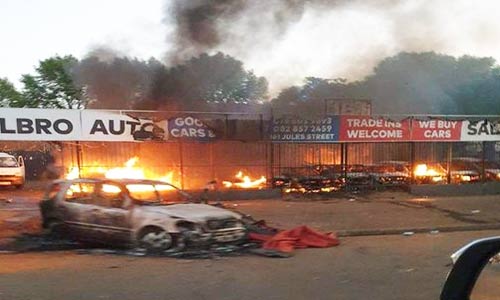 Each time we take to the internet, or using any of the old or new media to spew hatred and bigotry of one tribe, region or religion over the other whether for purely political gain or out of share hatred and ignorance, we are somewhat contributing our own share of the problem into a reservoir until it is full to the brim.

The world can today bear witness to how we all gather in the online and offline environments condemning the attack being carried out by South Africans on Nigerians and other foreigner nationals in the soil of South Africa; South Africa, a country we also assisted in letting off the jaws of apartheid.  Even though we choose to call the attack Xenophobia, do we completely forget that it could be the consequences of hate and bigotry the Blacks have spewed on one another over time? If the attack is truly Xenophobic, one then wonders why only the Blacks not indigenous to South Africa are subjects of the attacked.

Xenophobia by its very nature implies the fear of foreigners or strangers. So, if South African attacks on Nigerians and other foreign nationals is truly borne out of Xenophobia, why are only the Blacks being attacked? Or is any of the Whites in South Africa today indigenous to South Africa? But pause a moment, before you blame Bongani Mkongis, the current Deputy Minister of Police in South Africa, for publicly justifying the attack, have you asked yourselves, if we ourselves don’t have many of his likes among us.

You want the South African Government to ensure legal and proper integration of Nigerians and other foreign nationals into South Africa in order to end the continual Xenophobic attack on them, but here at home you opposed RUGA not because you have a superior argument or a better alternative solution but because of pure hatred for the people concerned.

You want a Xenophobic free South African society where our brothers and sisters from Nigeria and other countries can live and do business but here in Nigeria on your respective Facebook Wall, Twitter handle and Whatsapp platforms you are busy disparaging other’s regions, beating the drum of war, maligning one tribe over the other, demonizing people because of their tribes, region or religion to score cheap political points.

Tell me the difference between Femi Fanikayode and Bongani Mkongis? Is Femi Fanikayode indigenous to South Africa? Is there any difference between the two in terms of spewing hate and spreading bigotry? Each time Femi spews hate and disparage other tribes on his Twitter handle, don’t you hail him because it is in accord with your deep seated hatred too? Now, you are here teaching South Africans how to be tolerant to other nationals in their territory and you are not even tolerant to your own people within the same territory.

The truth is, we have many Bongani Mkongis among us here within out territory, Nigeria. In fact, each tribe or region has its own. We have them as individuals and in group. They are in different places; in civil service, public service, whether of state or that of the federation, they are many in politics and even in religious houses and some of them even mount the pulpit to spread hate. Haven’t you see the trait in the Afeniferes of the South West, a group that has been described by some concerned Yorubas as ‘self-acclaimed leaders’ of the Yorubas whose hatred for Yoruba Muslims, the Hausa and Fulani stinks to the high heaven. Their Press Releases are more often than not a true reflection of hate; a Press Release that some of the ground children of the actors may not be proud of in many years to come. Within the same region in South West, you would see some other Yoruba Muslims with deep hatred for the Christians just as you would see some Yoruba Christians whose unequal hatred for the Yoruba Muslims is yet to be marched. You also see example in the called Arewa groups in the North. This is not a private thing. We all see it fly all over the place. Sometimes their public display of hatred is nauseating.

This public display of hatred is not confined to the only the North or South West. You see our Igbo brothers and sisters who are yet to forgive Buhari and the rest of us who are either Yorubas and or Muslims, there is perhaps nothing yet anyone can do to disabuse their minds. In the North, you have leading figures like Farouk Kporogi whose Facebook wall is a frontline of hatred and bigotry. He assumed the role of a generalissimo and turns his Facebook page into a war front assuming there is battle where there is none.

You read sheer hatred from Press Releases of purely religious bodies who sometimes even regard themselves as the elders of the religion concerned. People who should spread the message of peace in the polity have unfortunately turned themselves into a funnel through which bigotry flows. We can go on and one mentioning names of groups and individuals. We want peace yet we fail to realize that spewing hate is not like mist that can evaporate into the thin air without visible appearance. We forget that even if hate and bigotry ever evaporate, it evaporates into a vapor. And like in water cycle, by the time the consequences of our collective hate speeches and public display of bigotry begin to manifest, it would pour down on us like heavy rain with violent wind.

What is happening in South Africa is as barbaric and animalistic as the hatred and bigotry we ourselves have planted among ourselves.

We beat the drum of war, individually and collectively, but forget that the song of war is not a good melody to dance to.

While we leave the shore of Nigeria peeping into the South African society, the supposed ideological wars between Nigerian Christians and Muslims still continues. The Muslims appear yet to come to term with the Shi’ites, the Christians don’t care to know the difference between them; the three accused one another of being the violent extremists; then end up hating one another while the politicians among them continue to draw the dividing lines. While we look into South Africa, the Tivs and the Jukuns are there in Taraba ravaging one another in ethnic crisis in a state home to T. Y. Danjuma, an ‘elder statesman’ whom one of the warring parties accused of fueling the crisis. While this still remains an allegation, the question would be, is T. Y. Danjuma a citizen of South Africa? And lest we lose grasp of the point here, we need to state that both the Jukuns and the Tivs are Nigerians.

I don’t know if the Berons and the Fulanis have finally come to term over there age-long crisis or if the Itsekiris and the Ijaws have settled their historical conflict. It may interest you to know that both the Berons and the Fulanis we talk about here are Nigerians and in fact both the Itsekiris and the Ijaws are indigenous to Nigeria. None of them is from a foreign land like the situation in South Africa. What about the Yorubas, Hausa and the Igbos? Have these three major tribes have finally settled to tolerate one another? This is just in Nigeria, we have not even crossed the border and this is how it is almost in every African country. Blacks. Blacks. Blacks. Who did this to you? See what we are doing to ourselves.

Willem Botha might be wrong when he said: ‘Black people cannot rule themselves… Give them guns, they would give themselves…’ But haven’t we consistently proved Willem Botha right?

Each time you feel like pressing your keyboards or keypads to go online across our border to lecture South Africans how to be tolerant to other nationals in their territory, remember that you need to first start the lecture from your family house. Go to your neighborhood and first lecture them how to be tolerant to their fellow neighbours.

Kazeem A. Oyinwola writes from Abuja