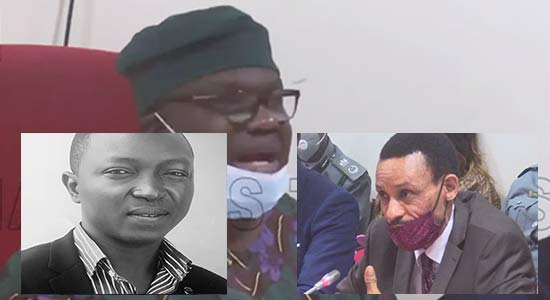 The lawyer to Clement Sagwak, Timzing Ramnap, has said that contrary to media reports, he has not withdrawn the petition against the Code of Conduct Tribunal Chairman, Danladi Umar, which he filed before the Senate Committee on Ethics, Privileges and Public Petitions on behalf of Sagwak.

Sagwak had, through his counsel, Timzing Ramnap, petitioned the Senate, while the Senator representing Plateau North, Istifanus Gyang, laid the petition before the Senate on April 29, 2021.

The petitioner alleged that he was assaulted by Umar and the policeman attached to the judge after he informed him (Umar) that his car was not properly parked in front of a shop at Banex Plaza in Wuse 2, Abuja, on March 30. He said the CCT boss slapped him several times and forced him to kneel in public.

However, it was reported on Thursday that the petitioner, through his lawyers, communicated to the Senate panel his intention to withdraw the petition. The Chairman of the Senate panel, Senator Ayo Akinyelure, said the case would still go on despite the decision of Sagwak to dump his petition.

The lawyer of the petitioner, Timzing Ramnap speaking with THENIGERIALAWYER on Tuesday denied ever withdrawing the petition.

He said he has been waiting for hearing notice from the Committee but up till date he hasn’t been served with any.

In a letter to the Chairman of the Committee dated June 28, 2021, and made available to THENIGERIALAWYER, Ramnap said:

“Since the filing of the petition, I have not been contacted by anybody for any settlement until on the last adjourned date which you practically asked me, my colleagues, and my client who have been appearing with me since the beginning of the hearing of this petition to meet with you in your office in order to Proffer solution to Hon. Danladi’s refusal to appear before the Senate and it was at the meeting in your office that you told us that Hon. Danladi’s men have approached you on how to find a softer ground for their principal(Hon. Danladi Umar) and that you have asked them to go and look for something substantial to give to the boy to start up something and that you are going to get back to us when they get back to you. In response to this position, remember vividly that we told you that the only way to settling this case before the Senate is to call for a formal meeting with a venue at the Senate Complex which you replied you were going to get back to us Whenever they (Justice Umar) gets back to you within the three days you gave then to return to you.

“On our departure and after some hours, the clerk called me on the phone that I should come back to his office for another discussion but this time around, I told him I would not go back to his office again for the same failed discussion and further suggested to him that if there is anything regarding this same case, I would advise it is formally discussed before other members of the Committee or have Executive session with all the Senates, that are members of the Committee and all the parties for a better understanding of the purported settlement between Justice Umar Danladi and my client and he replied me that if I cannot come over to his office, I cannot tell the Senate what to do on the matter.

“I wish to state that I have not withdrawn any petition from the Senate and still expecting hearing Notice from Senate in order to continue the fight for justice for my client as expected.” the lawyer said