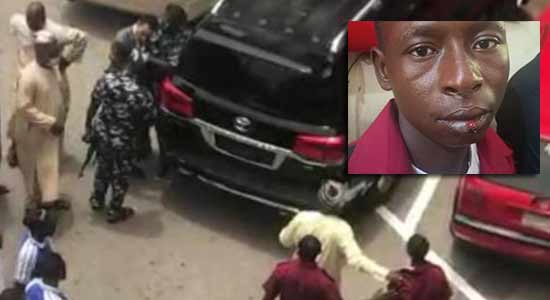 The Senate has invited a lawyer, Timzing Ramnap, to a public hearing over his petition on the recent reported assault of a security guard in Abuja by the chairman of the Code of Conduct Tribunal (CCT), Danladi Umar.

The upper legislative chamber asked the lawyer to appear before the Senate Committee on Ethics Privileges and Public Petitions for a public hearing on May 5.

The invitation letter which is dated April 27.

The letter is titled, ‘Invitation to a Public Hearing of the Senate Committee on Ethics Privileges and Public Petitions in Respect of a Petition by Timzing Veniyir Ramnap on behalf of Clement Sagwak against the Chairman Code of Conduct Tribunal Danladi Umar for Alleged Assault and Violent Attack on Him By The Chairman’.

“I am directed to invite you to a public hearing of the Senate Committee on Ethics Privileges and Public Petitions of the National Assembly in respect of a petition you wrote on behalf of Clement Sagwark against the Chairman Code of Conduct Tribunal Danladi Umar for alleged assault and violent attack on him by the chairman and sent to the Senate,” the letter read in part.

The letter signed by Freedom Osolo, the committee clerk, also stated that “the matter has been referred to the committee for detailed investigation and further legislative action”.

The committee informed the lawyer that “oral, written and material evidence would be accepted in the course of the presentation over the matter”.

It said additional evidence should be made available to the committee before the presentation.

“You are by this invitation, required to appear before the committee to make a presentation in connection with the petition in reference.

“You may wish to note that oral, written and material would be accepted in your presentation in connection with your petition in reference. Ten (10) copies of all written additional evidence (if any) should be made available to the Committee before presentation, please,” the letter added.

Recall how the CCT chairman was caught on camera physically assaulting Mr Sargwak, at Banex Plaza, Wuse 2, Abuja, on March 29.

In the five-minute viral video clip, Mr Umar, who presides over the trial of public officers accused of breach of code of conduct, was seen slapping and kicking the security guard – after an altercation ensued between them over a parking space on the premises of the plaza.

The victim said he was attacked by Mr Umar after he approached him for parking wrongly.

A phone repairer, Peter Onyiuke, present at the plaza, was also detained for one week allegedly on Mr Umar’s instruction, following a quarrel they had on the sideline of the scene created by the CCT chairman’s attack on the plaza’s security guard.

Mr Umar, in his public response, denied assaulting the security guard. The public official said he was the one assaulted at the Banex plaza.