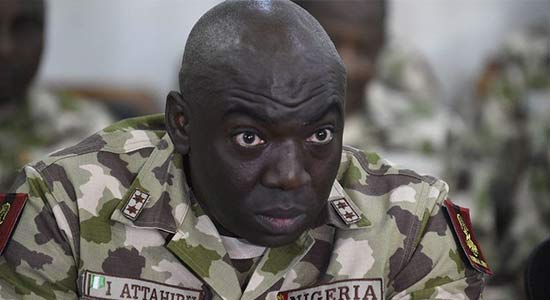 *Says Terrorists Did Not Recapture Damasak Town In Borno

THE Nigerian Army has denied reports making the rounds that Damasak town in Mobbar Local Government Area of Borno State has been recaptured by suspected Boko Haram terrorists.

This was contained in a series of tweets posted on the official Twitter handle of the Nigerian Army @HQNigerianArmy on Thursday.

According to the Army, although there was an attack in Damamsak town on Wednesday, the terrorists did not recapture the town.

The tweet accompanied, with videos of military officials who went around speaking to some residents, also read that the attackers were ‘effectively repelled’ by troops of the Nigerian Army during the attack.

“As we speak, troops are in total control of the general area and as can be seen in the attached video, the Commander of 5 Brigade, Brig Gen SS Tilawan, is driving round the town earlier this afternoon to assess the general situation,” the tweet read.

The Army also assured residents of Damasak and adjoining communities to remain calm as mop operation by the troops were ongoing to flush out the remnant of the terrorists who attacked a section of the town.

However, the Army’s claim was not consistent with reports earlier circulated about the attack on Tuesday evening.

The Vanguard had reported that the suspected insurgents who attacked Damasak town razed down houses, the Divisional Police Command, schools and shops before they hoisted their flags in strategic locations of the town.

Chairman of Mobbar Local Government Area Mustapha Bunu Kolo was reported to have said that many people lost their lives and properties during the attack on Wednesday.

“I was also informed that many people lost their lives in the attack, but I don’t have the actual number of casualties as the insurgents are still much around, wreaking havoc on innocent civilians”. Kolo stated.