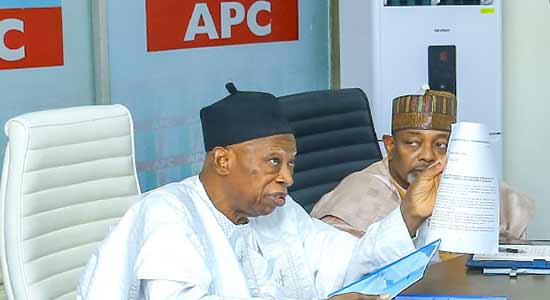 *Says Machina Is Crazy, APC’s Decision To Go With Lawan Is Final.

The National Chairman of the ruling All Progressives Congress (APC), Abdullahi Adamu, has threatened severe sanctions against the winner of the Yobe North senatorial ticket, Bashir Sheriff Machina for refusing to relinquish his ticket to the Senate President, Ahmad Lawan.

Adamu warned Machina to desist from making further inflammatory comments against the party’s decision to field Lawan as its senatorial candidate for Yobe North.

The National Chairman argued Wednesday, that the party is supreme and that it reserves the right to decide who gets its ticket in any election.

He said, “There’s nothing in the law stopping the Senate President from contesting for another nomination just because he lost a presidential bid.

“Machina is crazy and needs to get back to his senses immediately.

“He (Machina) should also be warned to stop inflaming the polity else we’ll not hesitate to take measures; Ahmad Lawan is our candidate for Yobe North,” he said.

TheNigeriaLawyer has consistently reported the impasse with updates including how Machina claimed his life was under threat for refusing to step down for Lawan after the Senate President failed to clinch the APC presidential ticket.

Machina has refused to give up his nomination saying, “I’m certainly in the race for Yobe North Senatorial seat.

“I was never contacted directly by the Senate President on the matter, even if I was, I have the exclusive right to concede or not,” he said.

Commenting on the situation, a Yola-based legal expert, Joshua Wugira mocked the APC for submitting Lawan’s name to the Independent National Electoral Commission (INEC), describing it as an exercise in futility.

According to him, if Lawan wins in the general elections, his victory will be upturned by the court.

He said, “The law is explicitly clear, no one can participate in an election without first being a product of a proper nomination process.

“Unfortunately for the country, the man at the centre of it all is the number one lawmaker in Nigeria, who should know better, having been in the National Assembly for 23 years now.

“Machina should stick to his gun in the interest of democracy and go to court. In the end, APC’s dictatorial democracy would not stand the law.”