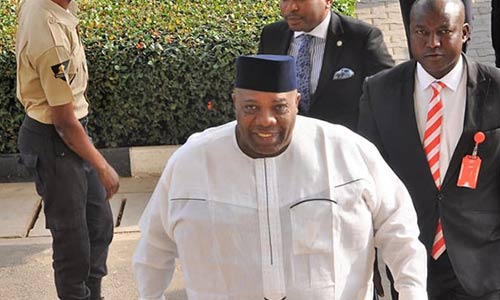 The Economic and Financial Crimes Commission (EFCC) on Wednesday closed its case in the alleged N702 million fraud case against Doyin Okupe, the former Senior Special Assistant to ex-President Goodluck Jonathan on media.

The anti-graft agency had slammed a 59-count charge, bordering on money laundering, criminal diversion of funds against Okupe, who denied all the charges preferred against him.

Okupe was arraigned before Justice Ijeoma Ojukwu of the Federal High Court in Abuja along with two companies, Value Trust Investment Ltd and Abrahams Telecoms Ltd allegedly involved in the commission of the fraud.

At the resumed hearing of the matter yesterday, prosecution counsel, Ibrahim Audu presented his last and sixth witness, Shuaibu Salisu, former Director Administration and Finance in the Office of National Security Adviser (ONSA), who told the court that, “Sometime in 2012, Okupe came to the Office of the National Security Adviser (ONSA), and after their discussion, I was directed to make a payment of N50 million to him.”

According to him, “Okupe provided his account details, where I paid the amount into the bank account of Value Trust Investment.”

He told the court that he was further directed by the ONSA to be paying N10 million monthly to Okupe for a period of over two years, which he said was reduced to a monthly N5 million towards the end of 2014 due to paucity of funds.

The witness said he made other payments to Okupe as directed, saying that at a point, he was instructed to pay the defendant the sum of N6 million.

Salisu further revealed that sometime in 2014, the then National Security Adviser (NSA) Col Sambo Mohammed Dasuki directed that he should pay the sum of N35 million to an account provided by Okupe and that he can also recall paying N50 million in cash to Okupe on Dasuki’s directive.

He told the court that he only obeyed directives in all the payments he made to Okupe and didn’t know what the monies were meant for.

When asked if there were evidence of the payments, the witness told the court that he usually provided Okupe with the payment vouchers, which he usually signed.

When also asked if all the payments were captured in payment vouchers, Salisu replied in the negative.

Under cross-examination by Okupe’s counsel, Akinlabi Akinbade, the witness disclosed that Okupe was not the only person that received payments from ONSA, saying that, anybody that the NSA directs that payment be made to, “we make payment as directed,” he said.

Under the same cross-examination, the witness also said he had no reason to believe that the payments he made were from an illegal source.

“Why would I assume it was illegal? I was only directed to make payments,” disclosing further that some of the payment instructions he carried out while working in the ONSA came verbally while some others came written, but that in the case of the payments to Okupe, all the instructions, he said were verbal.

One of the count-charge slammed against Okupe reads, “that you, Dr. Doyin Okupe, being the Senior Special Assistant to President Goodluck Jonathan from July 2012 to May 2015, and being the Managing Director/Chief Executive Officer, and a signatory to the bank account of Abrahams Telecoms Ltd, on or about the 3rd October, 2014 in Abuja within the jurisdiction of this Honourable Court, directly took possession or control of the sum of N35 million, transferred to the account of Abrahams Telecoms Ltd from the account of the Office of the National Security Adviser with the Central Bank of Nigeria purporting to be for special services when you reasonably ought to have known that the said fund formed part of the proceeds of an unlawful activity.”

The court adjourned the matter to June 28, 2019, for the defendants to open their case.