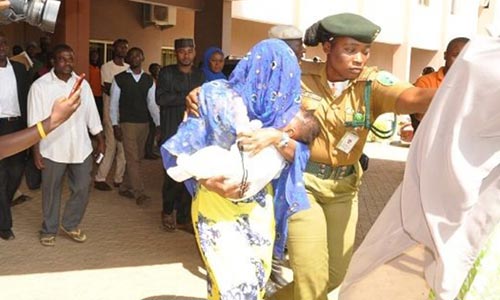 A Federal Capital Territory (FCT) High Court in Maitama on Monday fixed January 27, 2020, to deliver judgment in the trial of Maryam Sanda, the woman who allegedly killed her husband.

The accused was charged alongside her mother, Maimuna Aliyu; her brother, Aliyu Sanda; and their house-help, Sadiya Aminu.

The accused were arraigned by the Inspector-General of Police in 2017 on a two-count charge bordering on culpable homicide and conspiracy.

However, the judge, Yusuf Halilu, discharged the second defendant (Mrs Sanda’s mother), the third defendant (her brother) and the fourth defendant (the housemaid).

The three were arraigned alongside Mrs Sanda for allegedly tampering with evidence by cleaning the crime scene.

Mr Halilu ruled that the prosecution failed to show evidence proving that the second, third and fourth defendants actually perpetuated that act.

Thus, the judge struck out the case against them.

Court session
At the resumed hearing of the matter on Monday, the lawyer representing the police, Fidelis Ogbobe, submitted that the prosecution has proved the allegations levelled against the defendant beyond a reasonable doubt. Mr Ogbobe said they have established that Mrs Sanda caused the death of her husband by stabbing him.

He urged the court to “convict the defendant and sentence her for it.”

Responding, Mrs Sanda’s lawyer, Regina Okotie-Eboh, argued that the prosecution failed to tender evidence to corroborate the allegations. She said the prosecution did not call nurses or doctors from the hospital where the deceased was taken to as witnesses.

She also said no autopsy was carried out to ascertain the actual cause of Mr Bello’s death.

“The court only decides on a matter based on the evidence before it and not suspicions,” Okotie-Eboh stated.

She urged the court to discharge and acquit her client.

After listening to the two lawyers’ argument, the judge fixed January 27 to deliver judgment.